People with anxiety, autism, insomnia, and other conditions are tucking themselves in with weighted blankets. Here’s what research has learned so far about their supposed benefits. 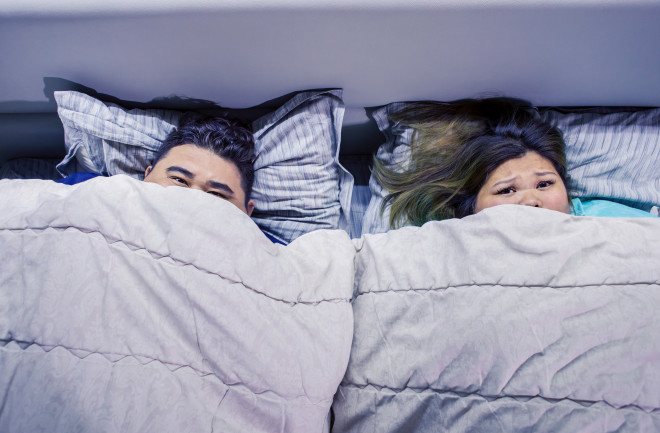 Anxiety has been my default state of being since I chewed my school pencils to stubs. Before big presentations, my insides turn to goo. And I can’t even watch sports without my chest clenching and my heart rate accelerating.

I heard about weighted blankets as a potential remedy when other anxious people started touting their benefits online. But I remained skeptical. Historically, only Ativan and similar drugs have penetrated my anxiety (well, and weekend-long meditation retreats, but who has time?). Finally — facing both a pandemic and a stressful election season — I decided to spring for a blanket bearing the weight and thickness of chain mail.

Seeded with dense materials like metal or glass beads, weighted blankets have exploded in popularity of late. Americans with anxiety, sleeplessness, autism, and related conditions — as well as some health facilities — now spend a combined $220 million a year on the blankets, which typically weigh between 12 and 30 pounds. Weighted blanket users have reported feeling calmer and sleeping better in a variety of studies. But larger trials are needed to pin down the scope of the blankets’ stress-reducing effects.

From a stress-relief standpoint, retreating under a heavy blanket is similar to getting a massage or a long hug from a friend. In all three cases, something’s putting significant pressure on your body, and that induces calming effects.

Pressure nudges your parasympathetic nervous system into what clinicians call “rest mode.” While stress causes flight-or-flight reactions, like shallow breathing or a speedy heart rate, pressure scuttles this response by slowing your heartbeat back down and lowering your cortisol levels. This biological braking system can ease you into a chiller frame of mind.

Jaime Vinson, a registered nurse in Fort Wayne, Indiana, can testify to this wind-down effect. As a kid, she gravitated toward her aunt’s heavy old upholstery blanket. When her own children struggled with anxiety and insomnia, she ordered them weighted blankets and was astonished at how well they seemed to work.

Inspired, Vinson decided to give the blankets a try with some of her patients at Fort Wayne’s Parkview Health System. “We had a patient here who was a brain injury patient, an agitated patient,” she recalls. “We weren’t giving him the tools he needed to soothe himself. I said, ‘That boy needs a weighted blanket.’” She also offered the blankets to dementia patients who were “sundowning” which refers to bursts of agitation during nighttime hours.

After getting positive feedback from patients, Vinson set out to study weighted blankets’ effects in a rigorous way. She and her colleagues designed a trial of the blankets in cancer patients scheduled for two chemotherapy infusions, which qualify as stressful experiences for almost anyone.

Vinson’s team randomly assigned the 58 patients in the study to one of two groups. Members of the first group used the weighted blanket only during their first chemotherapy session, and members of the second group used it only during the second session. In both groups, the researchers recorded patients’ anxiety levels when they arrived, and after they had been using the blankets for 30 minutes.

During the chemotherapy cycles, participants using the blankets reported more anxiety relief after 30 minutes than those not using the blankets. “I was shocked how well it worked, especially on some patients,” Vinson says. One young breast cancer patient came to the clinic with her mother. “The mom grabbed my hand and said it was the first time she had seen her daughter relax since she found out she had cancer.”

Vinson’s study appeared this year in the Clinical Journal of Oncology Nursing. Other weighted blanket trials also suggest that the blankets can induce what Vinson calls an “all-around chill feeling.”

Still, Vinson and other researchers are calling for further studies to demonstrate the blankets' calming effects. Many studies to date have involved small groups of participants, and as Vinson notes, there is no consensus as to what level of pressure the blankets should apply to be most helpful. (As a rough rule of thumb, some specialists recommend trying a blanket that's about 10 percent of your body weight.)

In a systematic review published this year, experts concluded that while weighted blankets show potential for treating anxiety-related conditions, the overall evidence base for the blankets is still relatively sparse. “More research is needed,” the researchers write, “to investigate the underlying mechanism of action."

I started testing my own weighted blanket as soon as it came out of the box. The timing seemed ideal, immersed as I was in the high drama of a not-yet-called presidential election. Even as I mainlined cable news and doom-scrolled social media, there was something undeniably comforting about the way the blanket pressed in on me from all sides. It seemed to propel me back into my physical body just as dire thought spirals were starting to overtake me.

The blanket offered something I didn't think was possible: a stable flat calm without the sluggish hangover drugs tend to produce. And there were no side effects — except the time one of my legs fell asleep under multiple sandbagged blanket layers. I won’t be ditching my backup anxiety meds anytime soon. But I will be huddling under my blanket for a thorough chill session before I think about popping another Ativan.