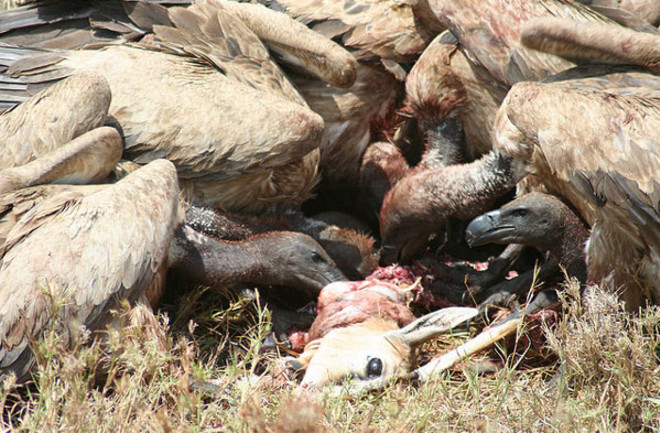 By now, you're probably familiar with the Body Farm at University of Tennessee. It's one of the places where bodies donated to science go to rot while being closely observed by appreciative forensic scientists, and we say that with the greatest respect: if not for the brave few who gave their mortal remains to be studied, we would have a much harder time telling when and how people found in fields, woods, and other unusual locales died. Now, scientists working at another Body Farm-like facility, Texas State University's Forensic Anthropology Research Facility, have performed a fascinating study to see exactly what happens when a human body is eaten by vultures.

Their findings imply that vultures can take much longer---37 days instead of 24 hours---to find a body than the carcass of a pig left in the wilderness, which is what previous studies in the Texas facility have used. On the other hand, vultures can also pick clean, or skeletonize, a body much faster than we'd thought: it took just 5 hours instead of the expected 24. The scientists also tracked where the vultures spread the body parts that they didn't consume, as they kept visiting the body over the following five months, which will be useful in figuring out how far away a body might be if a bone or other part is found by itself in future forensic investigations.