How Slow, Deep Breathing Taps Into a Natural Rhythm in Our Bodies

Emerging breath research explains why a respiratory rate of six breaths per minute can calm your mind and improve physical health. 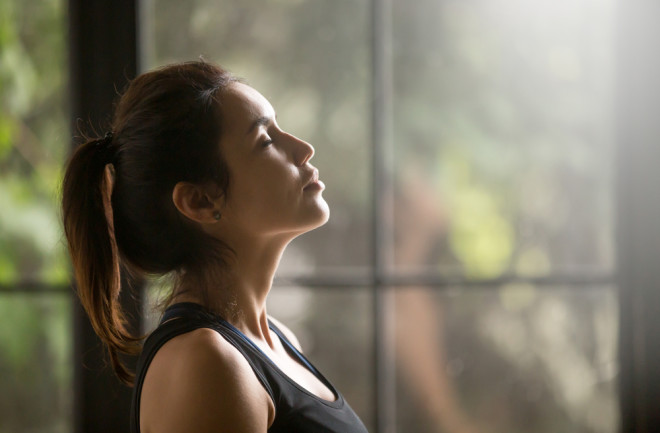 Every human spends an extraordinary amount of time breathing. In the past five minutes, you likely took somewhere between 60 and 100 breaths. You might take another 100 by the time you finish reading this story. And your daily breath count can easily top 23,000.

These figures are based on the so-called normal resting respiratory rate of about 12 to 20 breaths per minute in adults. (Other sources say 12 to 16 breaths, or 12 to 14, is more accurate.) But some emerging breath research suggests that much slower and deeper breathing may be more optimal.

“There may be good reasons to aim lower,” says Donald Noble, a physiologist and behavioral scientist at Emory University who has specialized in breath research over the past decade.

The reality is that many people reduce their breathing rate well below this average. Some do so through meditative, conscious breathing practices or yoga and breath holds. Research is accumulating to map the benefits of these practices. Noble and some other researchers have even proposed that a respiratory rate around six breaths per minute (less than half the typical rate) might synchronize with a particular rhythm already buzzing throughout the human anatomy.

Though plenty of researchers have studied meditation over the years, that work has often failed to differentiate between breath and other variables and mechanisms in the body and mind. Scientists have recently begun to isolate the breath, examining all that it can stimulate, regulate and support.

Noble’s research delves deep within the cardiovascular system to observe heart rate, neuropathways, blood vessels and relay neurons and receptors within them — all elements that have a close bond to the breath. They also seem to function optimally when we synchronize them, according to a study Noble published in the fall of 2019.

As humans slow their respiratory rate to about six breaths per minute, that frequency translates to about 0.1 Hertz. Incidentally, numerous studies over the years have observed this breath rate (and synchronization with heart rate) in people practicing Zen meditation as well as yoga mantras and even rosary prayers. Noble’s research demonstrates how tiny mechanisms throughout our cardiovascular system oscillate at that same frequency of 0.1 Hertz. “It’s almost like an inherent rhythm,” he says. “Your breath may be unlocking this rhythm that you already have going on in the background.”

Specifically, Noble is talking about the resonance of Mayer waves, which are closely associated with blood pressure in our arteries. These waves appear to oscillate around 0.1 Hertz, while some key pulmonary receptors are only activated during deep breaths. When we inhale and exhale at 0.1 Hertz, it has the potential to align the rhythm of these mechanisms with our heart rate.  “When you breathe at that same rate, it’s like pushing the swing at the perfect moment,” Noble says.

Because our blood vessels are everywhere, the potential benefits of this synchronization are vast, including improved metabolic efficiency and reduced oxygen consumption. “Together, they presumably improve physiology,” Noble says. Earlier in 2020, another group of researchers published similar findings about the importance of 0.1 Hertz related to breath and heart rate.

Much of the research also indicates there’s likely some variance in the exact rate for different people, perhaps dependent on age and other health factors. But there appears to be a similar resonance and frequency phenomenon in rats and mice. At this point, the direct links between slower breath and optimal heart rate and metabolic function need more vetting and trials in humans before being widely accepted.

In the meantime, Noble has started incorporating breath work practices into his own life, even for momentary benefits when he wants his mind to be sharp. “I realize there are larger gaps, just moment to moment, before the next thought comes in,” he says, after doing some deep breathing before this interview. “It kind of frees up a bit of mental space.”

To try slower and deeper breathing, he recommends filling and feeling the abdomen, rather than just the chest, with each prolonged breath — inhaling for five seconds, exhaling for five. Research suggests that doing this type of breathing 20 minutes or so per day can reap both long- and short-term benefits, though the tangible shift might be subtle.

Many slower, deeper breathing exercises appear to help people activate their parasympathetic nervous system, associated with calm and rest, and deactivate their sympathetic nervous system, associated with fight-or-flight responses. Plenty of research is now underway, and technology, such as wearable respiratory monitors, has been refined to help humans measure their breath rate.

Collecting data on the many facets of breath could confirm various beliefs and techniques, some of them stemming from millennia of integrative medicine and health practices, according to Charles Hennekens, a senior academic advisor at Florida Atlantic University’s Schmidt College of Medicine who specializes in cardiovascular health.

In September 2020, Hennekens published a paper with a team of researchers examining the potential for deep, mindful breathing at half the pace of the normal respiratory rate. Similar to Noble’s work, the team hypothesize that it could reduce blood pressure by stimulating the parasympathetic nervous system and the vagus nerve.

The value behind this research, according to Hennekens, is that it could open the door to more accessible, substantive heart health without cost barriers or modern medication. “This could be practiced by everybody at all levels,” he says. All you need is a pair of lungs, and some discipline.