How Nanobodies From Llamas, Alpacas And Yeast Could Help Combat COVID-19

Miniature engineered antibodies could potentially treat cancer and COVID-19, along with its emerging variants. A potential source for these nanobodies? Llamas. 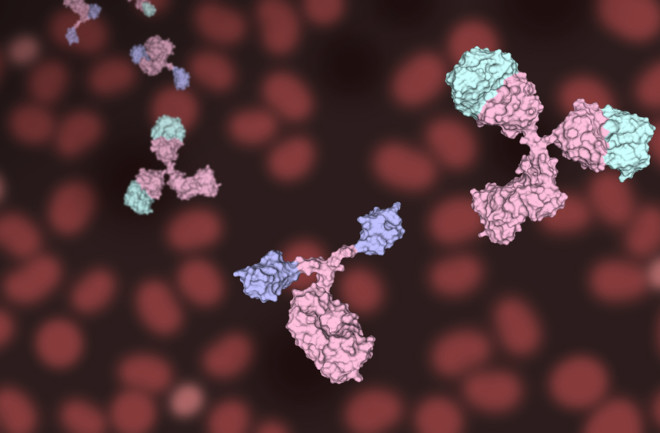 Llamas and camels may seem like unexpected partners for improving human health. But their unusual antibodies have properties that lead to the production of tiny, engineered proteins — appropriately known as nanobodies — that have the potential to treat a variety of diseases, from cancer to COVID-19.

About thirty years ago, scientists first discovered that there was something unique about camel antibodies compared to their human counterparts. That difference was so dramatic that the researchers initially assumed that the students who analyzed the camel blood sample had made a mistake.

Human antibodies are made up of four proteins: two heavy chains arranged in a Y-shape and two light chains, one intertwined with each of the prongs. The tips of those prongs attach to foreign bacteria and viruses, known as antigens, and kick off immune cell responses.

But within camelids — including llamas, camels and alpacas — there’s a simpler antibody design of just two heavy chains. Researchers have pared down the proteins even further and isolated the antigen-recognizing portions. Scientists call these resulting fragments, only a tenth the size of conventional human antibodies, nanobodies.

The Benefits of Nanobodies

Nanobodies are a boon for research that typically relies on antibodies to detect proteins, such as markers for human diseases, in cells and tissues. David Brody and Thomas Esparza, neuroscientists with the National Institute of Neurological Disorders and Stroke Intramural Research Program, have used labeled nanobodies coupled with MRI to spot disease-related proteins in the brain.

“They have a better chance of getting across the blood-brain barrier,” says Brody, who’s also affiliated with the Uniformed Services University of the Health Sciences. “A smaller nanobody can move around more easily in the brain than a full-size antibody.”

Their small size also allows nanobodies to penetrate deeper into tumors, which is helpful for both imaging and treatment. Nanobodies targeting cancer cells could direct drugs to tumors, says Khalid Shah, a biomedical engineer at Brigham and Women’s Hospital and Harvard Medical School.

Currently, clinical trials using nanobodies as cancer treatments remain in the early stages. Encouragingly, in February 2019, the FDA approved its first nanobody-based therapy. The drug will be used to treat a clotting disorder known as aTTP.

Researchers are also investigating nanobodies as a potential treatment for COVID-19. The FDA has approved the emergency use of several monoclonal antibody treatments — identical antibodies produced in laboratories — for COVID-19 patients. These antibodies attach to spike proteins coating the viruses and block entry into additional cells. Early results indicate that these treatments can prevent the development of severe COVID-19 symptoms. However, monoclonal antibody production is expensive, and treatments require an IV infusion by a health care provider.

Meanwhile, a nanobody-based drug could be used more broadly. Nanobodies can be produced cheaply, using bacteria or yeast rather than human cells, as required by monoclonal antibodies.

“From a production standpoint … in theory, we should be able to produce [nanobodies] at scale for much lower costs — and potentially faster,” says Esparza, who’s also affiliated with the Henry M. Jackson Foundation for the Advancement of Military Medicine. Even better, because nanobodies are smaller and hardier than antibodies, they could possibly be delivered as a nasal spray.

Brody, Esparza and their colleagues developed nanobodies to the SARS-CoV-2 spike protein with the help of a 16-year-old llama named Cormac. The team injected him with part of the coronavirus spike protein and screened the antigen-recognizing portions of over 100 million antibodies in his blood. They identified several nanobodies that not only attached to the spike protein, but also interfered with binding of the spike to its human cell receptor, ACE2.

Nanobody treatments don’t have to come directly from llamas, though. Researchers at the University of California, San Francisco took another approach to develop nanobodies for SARS-CoV-2: They screened a set of 2 billion nanobodies expressed in yeast to identify ones that disrupted the interaction between the spike protein and ACE2.

The team also found that the nanobodies blocked SARS-CoV-2 infection of Vero E6 cells, a type of cell derived from an African green monkey’s kidney — especially when they linked together nanobodies for a more potent effect.

While these nanobody treatments can’t replace a COVID-19 vaccine, they’re still important in the fight against COVID-19. “Therapeutics are still very critical because it takes time to vaccinate the whole world,” says Michael Schoof, a biochemist at UCSF. “And … still, some people will get sick.”

For people who do get COVID-19, receiving nanobodies soon after infection could potentially help them fight off the disease faster than just relying on their immune systems, Brody says.

Similar to vaccine developers, researchers are still exploring how the nanobodies handle the mutated spike proteins of coronavirus variants. Interestingly, nanobodies could potentially prevent variants from even arising. In a recent study, researchers generated nanobodies that recognized different portions of the SARS-CoV-2 spike protein and linked two of them together. The resulting nanobody was multivalent, meaning that it could attach to multiple locations on the spike protein simultaneously.

Still, we currently lack tests in animals and humans that prove nanobodies as an effective treatment for COVID-19. But researchers are optimistic.

“What I really hope happens, more than anything, is just that nanobody technology takes off and makes a difference,” Schoof says. “It doesn't really matter whose nanobody it is — it just needs to be a globally available, easy-to-produce treatment.”