How I Learned To Stop Worrying and Love Cloned Food

The FDA has finally ruled that food from cloned animals is as safe as food from those produced by conventional reproduction, and will not require a special label (except, perhaps, in California). The 968-page report, released Tuesday, details these peer-reviewed findings, which also conclude that cloning does not pose any unique risks to the animals, compared with other reproductive techniques. But cloned meat and dairy still won’t be available at the supermarket for a while—the USDA is asking for a “voluntary moratorium” on sales to allow the consumer marketplace to get over their revulsion towards genetic modification. This “ick” factor, which seems to dominate the arguments against cloned meat, may stem largely from misunderstanding the cloning process. 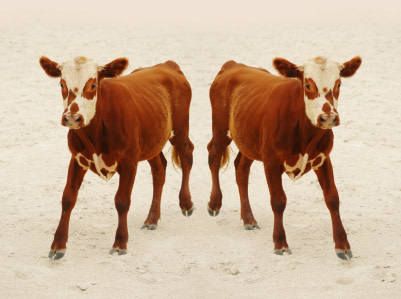 The primary rationale for wanting to clone a cow is that it has a reliable record of resisting disease and producing tender, juicy offspring and/or copious amounts of frothy milk. But as with humans (sorry, ladies, this is what the research says), older cows don’t reproduce or lactate very well. So if you have a champion-caliber cow, the best way to get more of your product is to make a cow with the same genetic material and begin the cycle again. An important point in all this frothing milk and emotion: you won’t actually eat the cloned animal. At up $20,000 a pop, they’re far too valuable for that. Instead, the cloned cows engage in more conventional forms of reproduction, and it is their progeny who will end up as dinner. It’s also important to view animal cloning in comparison with current breeding techniques, which are a far cry from the way they do it on the Discovery Channel. Farmers—even those producing organic meats—use selective breeding and artificial insemination to get the tastiest and most bountiful products. How else would cows like this