Research says between swimming, sprinting and other sports, athletic build can play a large role in an athlete's success. 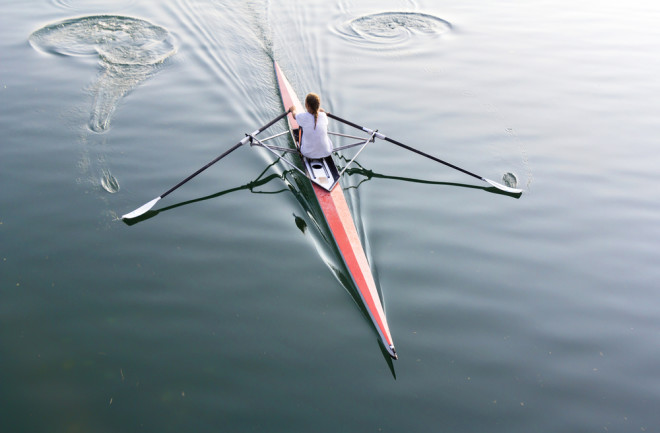 When the Australian Institute of Sport started the “Talent Search Program,” its mission was to find teenagers who had specific physiques and could be trained as elite athletes in sports that matched their body types. They hand-picked Megan Still at 15 and a decade later, she brought home to Australia a gold medal for rowing at the 1996 Olympic games in Atlanta.

The institute chose Still because she had what they considered the perfect physique for a rower — tall with long limbs and a long torso that allows for a tall sitting height.

While not all competitive athletes who find success in a specific sport have the same build, some do. Some world class swimmers are tall with long limbs; some elite weightlifters have shorter arms and legs with thick muscles; some sprinters have slim legs and narrow hips.

But which comes first? Does form and function — that is, an athlete’s physique and how their body works — make them fit to excel in a specific sport? Or, does their body develop into the ideal body type because of their training?

Research suggests it’s an almost even split between genetic and environmental factors.

And, while the average height for a basketball star is 6’6”, the range is wide. The shortest player was 5’3”.

Edwin Reese, the famed coach for the University of Texas who led dozens of collegians to swim on to win Olympic gold, says in an interview with Brett Hawke that while he looks for physical attributes in his swimmers, there’s also something else: A “feel for the water,” which, despite being a life-long swim coach and having lots of research to pull from, “we do not know how to teach.”

That said, research does suggest that an individual’s athletic ability can be determined by the strength of their skeletal muscles (muscles used for movement) and the type of fibers in those muscles, according to MedlinePlus. There are two types: slow-twitch fibers and fast-twitch fibers.

Someone with slow-twitch muscle fibers — meaning they contract slowly but can work for a long time without tiring — might excel at long-distance running or distance swimming. Those slow-acting fibers promote endurance.

But it’s not just about the muscles. Some people have more muscle mass, are taller, are more flexible or have better coordination. And some are better at pumping oxygen into their tissues.

Genetics can tell researchers how good someone is at pumping oxygen. The ability to produce and use oxygen for longer than the average person can give someone a huge athletic advantage.

A mutation in the EPOR gene, which is responsible for the production of red blood cells, allows athletes to keep producing red blood cells (rather than shutting off production). This leaves an athlete with an abnormal — and advantageous — amount of red blood cells, which continue to carry oxygen from their lungs to the rest of their body. In turn, the athlete can perform at a high level. Finnish cross-country gold medalist skier, Eero Mäntyranta, famously had this gene mutation; so did members of his family, many of whom were champion endurance athletes, too.

While all body types have the ability to find athletic success, the builds below are common within their sport.

Some world class swimmers are not only tall but have long limbs, too, especially long arms. They also have big feet, which they use for propulsion and big hands that they use like paddles to move in the water. Their hips are narrow, so they have less drag and, they are flexible, especially in their shoulders, which makes their strokes more efficient.

Some sprinters are tall, have slim legs and narrow hips, along with a compact, muscular build. This body type is also known as a mesomorphic body shape. More than 80 percent of their muscle fibers are fast twitch.

Some marathon runners have light frames, slim legs and, unlike the sprinter, are not tall. Their skeletal muscles are made up of a high percentage of slow twitch fibers and, on top of that, they have a high oxygen uptake, and have a high capacity to handle dehydration.

Some female gymnasts have a small, compact and narrow body that allows for speedy rotations. This wasn’t always the case. In the early years of Olympic gymnastics, there was an emphasis on dance and grace, so gymnasts were tall and lithe. Nadia Comăneci brought power into women’s gymnastics and, with her short stature and lower center of gravity, she had better balance. Then, in 1984, Mary Lou Retton introduced the small, boxier frame that has become the signature, powerful body type of most elite female gymnasts.