Do pandemic-spurred lockdowns hurt our ability to develop a healthy immune system? Maybe. But there's ways to combat potential effects. 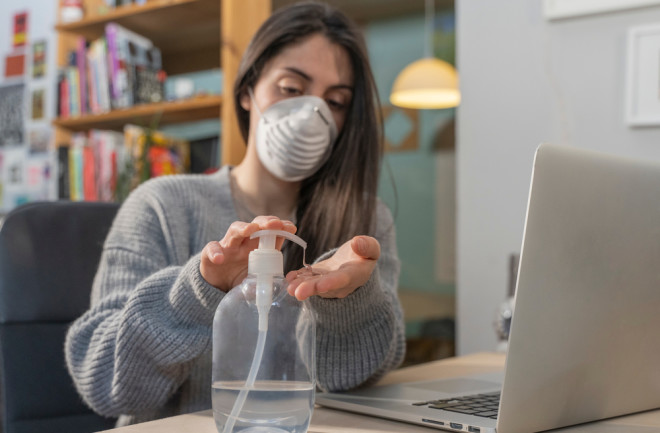 Face coverings and social distancing are necessary for keeping the novel coronavirus at bay, but are pandemic-related precautions affecting our ability to ward off other ailments down the road? Health experts may not be able to say for sure yet, but there are ways to balance the two interests. Pro tip? Get outside (preferably a good distance from people who don't live in your household) and take a deep breath. Your microbiome will thank you.

What is the Microbiome?

Our bodies play host to a wide array of microorganisms that make their home on our skin and inside our guts, airways and other organs. Their presence is so significant that the number of bacteria in our guts is actually greater than the number of human cells in the human body. The organisms' collective DNA is known as the microbiome and scientists have studied its effect on everything from our social lives to our mental health.

Put simply: The microbiome provides the immune system with information about potential intruders. It clues our body in on what is and isn't a threat and helps prepare our white blood cells for battle. Some of the microbiome is built up shortly after birth. A trip down the birth canal followed by months of breastfeeding helps babies form their unique microbiome, but exposure to the natural environment in those first few years of life is crucial as well, experts say.

“All of these organisms provide data for the immune system,” says Graham Rook, an immunologist and professor emeritus at University College London. “It's like the brain; it has to have data. And just like the brain, it needs the data early in life.” If the body fails to get the right messages about its environment, it may go rogue and attack things it shouldn't, leading to conditions like allergies, asthma and autoimmune disorders.

Since the first few years of life are most crucial, Rook is especially concerned that if young children are not leaving their homes, they are not getting the exposure to microbes they need. “That is why confining an infant to a high-rise apartment during COVID lockdowns is likely to be detrimental,” says Rook. “The microbiome of a modern apartment is not a useful exposure.”

A recent study comparing different daycare settings in Finland demonstrated that simply enriching the outdoor play areas with elements of the natural environment had a positive effect on the microbiomes in children. For four weeks in 2016, young children played on segments of forest floor and sod placed on top of the existing gravel. Instructors at the schools also engaged the children in activities such as planting gardens, resulting in average daily exposure of 90 minutes per day.

The results indicated an increase in microbe biodiversity on the skin and in the guts of the children, and a corresponding bump in immune system function. The study offers hope that even children in urban environments can build their microbiomes with some exposure to the natural world.

Animals Can Help Bring Exposure, Too

“The most evidence-based strategy for improving your microbiome from an immunity [and] asthma perspective is to get a cow,” says Rob Knight, a University of California, San Diego professor and co-founder of the American Gut Project. “But that isn’t especially practical if you live in an apartment in the city.”

In studies completed by scientist Erika von Mutius, life on a farm and bacteria carried by cows, specifically, appeared to have the best benefit to humans, Knight says. Dogs and cats that spend time outdoors can also bring in some good microbes, experts say, which provides another reason to adopt a pet while sheltering in place.

Knight says a diet promoting microbiome diversity would include a diverse range of plants and fermented foods, with limits on sugar and salt. Rook adds that although building a healthy microbiome can be most crucial in the early years, studies indicate that adults can be affected as well.

“Sick adults have less diverse gut microbiomes,” Rook says, adding that a diverse diet and time in the natural environment are key to bolstering health.

While it is true that humans pick up “data” from other humans and that is a missing piece of the equation now, Rook notes that he is far more concerned about young children who are not leaving their homes and getting exposure to microbes in their natural environments. And if you're worried that a lack of colds this year might lead to an immune system unprepared for next year's viruses, experts say that's not exactly how it works.

“There’s no evidence that exposure to pathogens per se is good,” Knight says. “Current thinking is that exposure to a wide range of harmless organisms from other people and the environment is good.”

So, while the long-term health effects of social distancing might not be fully understood yet, embracing a lifestyle that includes healthy food choices and time spent outdoors may be the best tools at our disposal right now. Rook also suspects that mask-wearing doesn't inhibit the ability to absorb what is needed from the outside world.

“Plenty of small particles from the natural environment are wafting into the lungs,” he says.