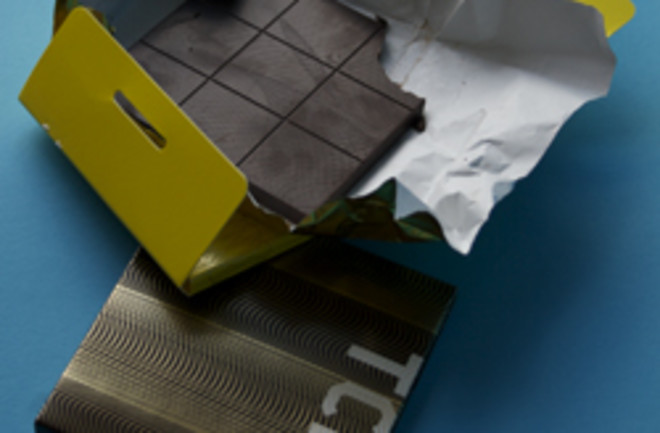 Sweet ScienceTcho, a San Francisco chocolate maker that counts among its staff a former NASA techno­logist and a cacao expert with a degree in tropical botany, is betting that science will take choco­laty bliss to the next level. The company (pronounced “cho”) is distributing portable “flavor labs”—with thermometers, pH sensors, and other equipment—to cacao farmers in Peru so they can experiment with processing and fermentation to create higher-quality beans and command a better price. Meanwhile, at Tcho’s California factory, control settings on the chocolate-making equipment can be monitored remotely through an iPhone application. The proof is in the eating: All four cultivations—Fruity, Citrus, Nutty, and Chocolatey—produce complex flavors, but try the Citrus first for its balance of tartness and sweet zest.

Histories of the development of the atomic bomb line the shelves of bookstore science sections, but the combination of clear, in-depth scientific explanation and outstanding research makes this book, from the author of Fermat’s Last Theorem, the one you should grab.

The authors, both computer scientists, argue that it will soon be common to record all our experiences in a comprehensive digital personal memory. A decade ago, Bell began digitizing his own life in an archive that now includes phone-call audio and photos from a wearable camera. Even if you are skeptical of his claim that the benefits of “life-logging” outweigh the privacy risks, his self-experimentation makes for fascinating reading.

The Fallen Sky by Christopher Cokinos

This thorough work, populated by colorful characters, examines meteorites from several angles—mythology, history, and contemporary studies—even investigating whether meteorite impacts have influenced the evolution of life on Earth. You’ll learn about the Oregon woodsman who made off with a 15-ton meteorite in 1903 (he was later forced to relinquish it) and follow the author on a five-week search for space rocks in Antarctica.

Offering powerful drama and stunning cinematography, this documentary from the BBC illustrates the balancing acts that allow animals to survive in a challenging environment. It goes beyond the usual megafauna to explore Yellowstone’s whole ecosystem: Bison and wolves share screen time with microbes, plants, and weather patterns. If you crave some time in the wild but can’t make it to the real thing, check out this film. Available September 29.

ABC’s new sci-fi drama, directed by David Goyer (cowriter of The Dark Knight) and loosely based on Robert Sawyer’s book of the same name, picks up in the chaotic aftermath of a mysterious mass blackout: Every person in the world has just lost consciousness for two minutes and 17 seconds. As FBI agents Mark (Joseph Fiennes), Demetri (John Cho), and others compare notes on the dreams they had during the lost time, they realize that everyone was briefly catapulted six months into the future. Expect fast-paced, gripping stories as the series’ well-drawn characters explore the causes and implications of their bizarre experience.