Horses use their ears to communicate with each other. 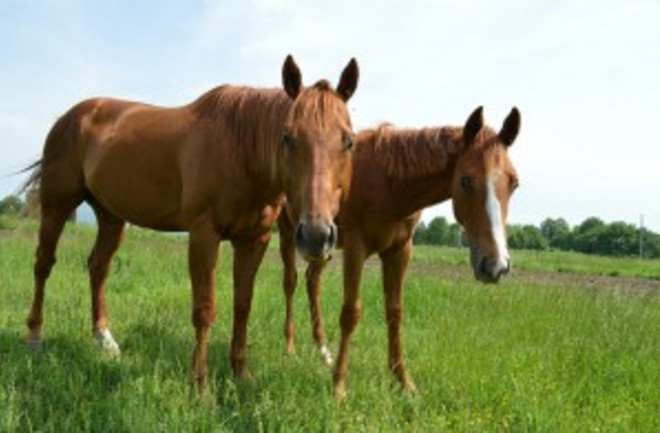 Photo: Flickr/Viva Granda PhotographyIf you've ever spent time with a horse, you've probably noticed how mobile their ears are; not only can they point up or lie flat, but they can swivel nearly 180 degrees! Horse handlers harness this mobility to tell a lot about how a horse is feeling by ear-watching. But it is less clear whether horses use their ears to communicate to each other. To test this, British scientists let horses choose to feed from one of two buckets. Behind the buckets was a life-sized photo of a horse's head, facing either to the right or left. If the real horse could see both the ears and eyes of the horse in the picture, it would pick whichever bucket the picture-horse was pointing towards. But if either the ears or eyes were covered, the horse ignored the picture and chose a random bucket, showing that horses watch the eyes and ears of other horses to gather information, and may purposely use their own to convey useful tidbits. Although this may not be as fun as Mr. Ed, it is a bit more believable.The eyes and ears are visual indicators of attention in domestic horses. "Sensitivity to the attentional states of others has adaptive advantages, and in social animals, attending to others is important for predator detection, as well as a pre-requisite for normal social functioning and more complex socio-cognitive abilities. Despite widespread interest in how social species perceive attention in others, studies of non-human animals have been inconclusive about the detailed cues involved. Previous work has focused on head and eye direction, overlooking the fact that many mammals have obvious and mobile ears that could act as a visual cue to attention. Here we report that horses use the head orientation of a conspecific to locate food, but that this ability is disrupted when parts of the face (the eyes and ears) are covered up with naturalistic masks. The ability to correctly judge attention also interacted with the identity of the model horse, suggesting that individual differences in facial features may influence the salience of cues. Our results indicate that a combination of head orientation with facial expression, specifically involving both the eyes and ears, is necessary for communicating social attention. These findings emphasise that in order to understand how attention is communicated in non-human animals, it is essential to consider a broad range of cues."

Illustration of stimuli and main results.Photographic stimuli including manipulations that incorporate fly masks to cover key internal features of the face. The photographs were reproduced at life size and used as the model in an object choice task to establish whether horses could use the head orientation and facial expression of a conspecific to locate hidden food. Both model horses are shown here in the three experimental conditions: all cues visible; ears covered; eyes covered. WG is the horse on the left of the image; MC is the horse on the right. (B) Percentage of horses choosing the congruent bucket for each condition. Asterisk: P < 0.05 (binomial probabilities, two tailed). Related content: NCBI ROFL: The hidden menace of non-equine horses. NCBI ROFL: Predicting the buoyancy, equilibrium and potential swimming ability of giraffes by computational analysis. NCBI ROFL: Double feature: are your dog's cowlicks normal?