Horses can read your emotions. 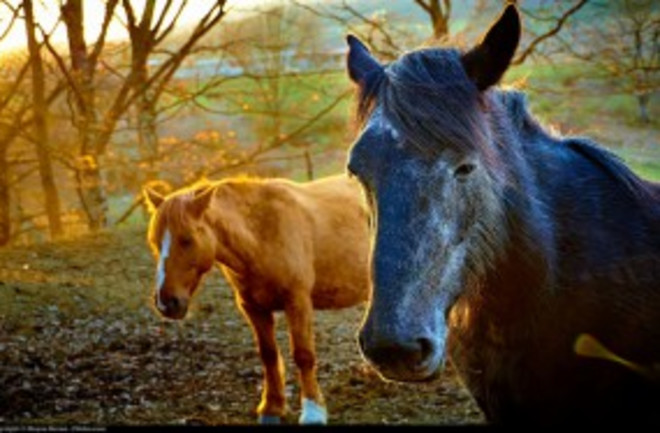 According to this study, you can add horses to the short list of animals that can tell if you're happy or angry (which currently includes only dogs). To test this, the authors showed horses photos of either happy or angry faces and tracked whether the horses looked to the left or right -- apparently, looking left tends to be associated with negative stimuli. The researchers found that the horses looked left more often and their heart rates sped up when viewing angry human faces, indicating that they were identifying the appropriate emotions. Our biggest criticism of this study? They failed to include a "why the long face?" joke.

Functionally relevant responses to human facial expressions of emotion in the domestic horse (Equus caballus) "Whether non-human animals can recognize human signals, including emotions, has both scientific and applied importance, and is particularly relevant for domesticated species. This study presents the first evidence of horses' abilities to spontaneously discriminate between positive (happy) and negative (angry) human facial expressions in photographs. Our results showed that the angry faces induced responses indicative of a functional understanding of the stimuli: horses displayed a left-gaze bias (a lateralization generally associated with stimuli perceived as negative) and a quicker increase in heart rate (HR) towards these photographs. Such lateralized responses towards human emotion have previously only been documented in dogs, and effects of facial expressions on HR have not been shown in any heterospecific studies. Alongside the insights that these findings provide into interspecific communication, they raise interesting questions about the generality and adaptiveness of emotional expression and perception across species." Related content: Horses use their ears to communicate with each other.Are racehorses still evolving to get faster?Dogs recognize the emotions of other dogs as well as humans.