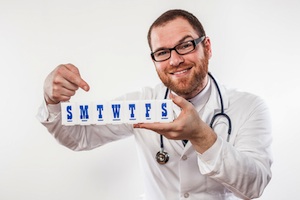 Hey baby, I take my pill every day…if you know what I mean

Women can choose from a plethora of reversible birth control options, including diaphragms, IUDs, and the Pill. On the other hand, when men want to be responsible without resorting to permanent infertility, they have only one choice: condoms. But a new study

has found a compound that may hold the key to a reversible male birth control pill. The manufacturers of any male pill

face the daunting task of restraining the production of about 1,000 sperm per second. To create all those sperm, the testes depend on, among other things, a protein called bromodomain, or BRDT. It was this protein that researchers decided to hobble, using a compound called JQ1 can pass from the blood into the testes and bind to BRDT, preventing the molecule from carrying out its usual duties and the testes from producing viable sperm. When researchers gave male mice regular injections of JQ1, the rodents’ testes shrank and their sperm counts dropped. Those sperm that they did produce swam poorly. And when fourteen lucky male mice, half of them treated with JQ1, half of them with placebo injections, mated with females, the ones receiving low daily doses of JQ1 had a much-reduced success rate as measured in number of offspring. By upping the dosage, the scientists were able bring that number down to zero. A little over a month after they stopped receiving JQ1, the mice recovered their fertility and sired as many litters and healthy pups as the control mice. There have been many attempts to develop a male contraceptive, from hormonal treatments

, to substances that target sperm cells' ability to reach maturity

, survive in the uterus

, or find the egg

at all, to just blasting the testes with ultrasound

. All these remain in development, and JQ1 may well join them in the long waiting line of not-quite-perfect products---who knows, for instance, how well the compound might work in human males. But a variety of potential birth control options, as we can see from the female example, are always nice.

Image of pill doctor via Shutterstock