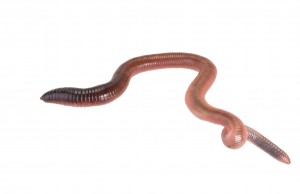 When it comes to producing nanoparticle-sized semiconductors called quantum dots, scientists are now looking to earthworms to do their dirty work. Like all semiconductors, the conductive properties of quantum dots are very specific to their crystals' size and shape. But quantum dots have an advantage because scientists can precisely control the size of the crystals formed, and the resulting conductive properties of the dots. Their applications include LED lights, solar cells, and tiny lasers. Since quantum dots absorb and emit light, they may also aid in medical imaging, but thus far scientists have struggled to incorporate these dots into living cells. Because they are potentially toxic, the dots must undergo a number of chemical reactions before they are able to enter or attach to living cells. Scientists now think the trick to making the dots compatible may lie in producing the dots within living organisms. In the past few years scientists have produced quantum dots [pdf] in fungus, bacteria, and yeast. In a new study, published in Nature Nanotechnology this week, researchers explored the production of glowing quantum dots in a more complex organism: the earthworm. The earthworm has a special detoxifying layer in its gut which removes and isolates toxins from its system. The researchers put this mechanism to use by exposing earthworms to soil spiked with cadmium chloride (CdCl2) and sodium tellurite (Na2TeO3) salts. For nearly two weeks the worms ingested the toxic salts and, just as the researchers had hoped, the isolated salts combined in the worms' guts to form quantum dots of cadmium telluride (CdTe) coated in organic chemicals. These crystals glowed a particular shade of green under UV light, just like their lab-produced counterparts, but they were also water soluble, which is necessary for the dots to function in biological systems. To test the dots' compatibility with living tissue researchers placed these worm-produced quantum dots in a culture dish with cancer cells from mice. The cells quickly absorbed the dots and demonstrated the characteristic green glow under UV light. White blood cells, on the other hand, required a little extra coaxing. Before the cells would absorb the dots, researchers had to coat the quantum dots in polyethylene glycol---a polymer often used to make medications easier to administer and absorb. The study's success is twofold. One, it demonstrates that quantum dots can be produced in worms. And two, it shows that these biosynthesized dots can be used for live-cell imaging. In order to make the technology more broadly applicable, researchers will have to try other salts---preferably ones that do not include toxic heavy metals---to see what else these worms can produce. Image courtesy of jps / Shutterstock