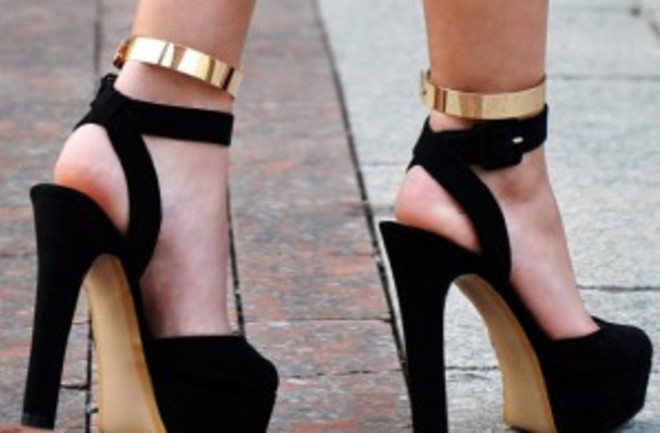 If you've ever worn high heels, you know that most people don't wear them for fun. They tend to hurt your feet and cause all kinds of foot and ankle problems for women who wear them often. Clearly, people torture themselves with footwear because they think it makes them more attractive. But does it? Well, this researcher (who you might recognize from such classics as "Bust size and hitchhiking: a field study") took it upon himself to scientifically test this hypothesis. He had a "19-year-old female confederate" wear shoes with varying heights of heels and tested whether people were more likely to help her by filling out a survey or picking up a dropped glove. As you might have guessed, the heels did make a difference: the higher the heels, the more likely men--but not women--were to help. In the final experiment, the woman sat in a bar and timed how long it took before a man hit on her. On average it took 7 minutes for a man to hit on the woman in high heels, but 13 minutes for the same woman in low heels (in case you were wondering, the study was done in France). The author concludes by speculating on the reasons that high heels make a woman more attractive: Do they make her feet smaller and youthful-looking? Do people just associate high heels with sexiness? In our opinion, he left out an important possibility: maybe people just feel sorry for someone hobbled, even if they did it to themselves.

High Heels Increase Women’s Attractiveness "Research has found that the appearance of women’s apparel helps increase their attractiveness as rated by men and that men care more about physical features in potential opposite-sex mates. However, the effect of sartorial appearance has received little interest from scientists. In a series of studies, the length of women’s shoe heels was examined. A woman confederate wearing black shoes with 0, 5, or 9 cm heels asked men for help in various circumstances. In Study 1, she asked men to respond to a short survey on gender equality. In Study 2, the confederate asked men and women to participate in a survey on local food habit consumption. In Study 3, men and women in the street were observed while walking in back of the female confederate who dropped a glove apparently unaware of her loss. It was found that men’s helping behavior increased as soon as heel length increased. However, heel length had no effect on women’s helping behavior. It was also found that men spontaneously approached women more quickly when they wore high-heeled shoes (Study 4). Change in gait, foot-size judgment, and misattribution of sexiness and sexual intent were used as possible explanations." Related content: Should you compliment a woman before asking her out? Science weighs in.NCBI ROFL: Bust size and hitchhiking: a field studyNCBI ROFL: Women's bust size and men's courtship solicitation.