Heritability and genomics of facial characteristics

On several occasions I've gotten into discussions with geneticists about the possibility of reconstructing someone's facial structure by genes alone. Combined with advances in pigmentation prediction by genetics, this could put the sketch artist out of business! But all that begs the question: how heritable are facial features anyhow? Impressionistically we know that feature are broadly heritable. This isn't a tenuous supposition, you see the resemblance over and over across families. All that being said, what are the specific quantitative heritability estimates? How do they relate to other traits we're interested in? This review from the early 1990s seems to have what I'm looking for, The Role of Genetics in Craniofacial Morphology and Growth. Below is a table which shows averaged heritabilities for a range of facial quantitative traits from a large number of studies: 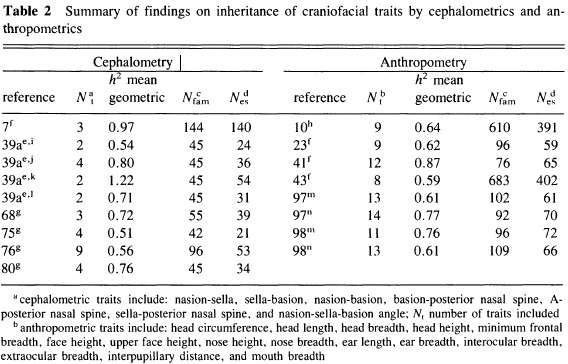 h^2 is the narrow-sense heritability. Also, in care you are curious cephalometry seems to be utilizing imaging of some sort. Anthropmetry refers to the more conventional measuring techniques (get out the calipers!). These results suggest that facial features are typically more heritable than behavioral traits (usually < 0.50), but less heritable than height (0.8-0.9). This seems plausible to me. These results came to my attention because of a paper in the European Journal of Human Genetics, Genetic determination of human facial morphology: links between cleft-lips and normal variation:

Recent genome-wide association studies have identified single nucleotide polymorphisms (SNPs) associated with non-syndromic cleft lip with or without cleft palate (NSCL/P), and other previous studies showed distinctly differing facial distance measurements when comparing unaffected relatives of NSCL/P patients with normal controls. Here, we test the hypothesis that genetic loci involved in NSCL/P also influence normal variation in facial morphology. We tested 11 SNPs from 10 genomic regions previously showing replicated evidence of association with NSCL/P for association with normal variation of nose width and bizygomatic distance in two cohorts from Germany (N=529) and the Netherlands (N=2497). The two most significant associations found were between nose width and SNP rs1258763 near the GREM1 gene in the German cohort (P=6 × 10−4), and between bizygomatic distance and SNP rs987525 at 8q24.21 near the CCDC26 gene (P=0.017) in the Dutch sample. A genetic prediction model explained 2% of phenotype variation in nose width in the German and 0.5% of bizygomatic distance variation in the Dutch cohort. Although preliminary, our data provide a first link between genetic loci involved in a pathological facial trait such as NSCL/P and variation of normal facial morphology. Moreover, we present a first approach for understanding the genetic basis of human facial appearance, a highly intriguing trait with implications on clinical practice, clinical genetics, forensic intelligence, social interactions and personal identity.

The authors get to the point at the very end of the discussion:

In conclusion, we have demonstrated that association with one marker could explain ca. 2% of nose width variation, and a tentative association between bizygomatic distance and other markers could account for about 0.5% of variation. Finally, our study represents the first approach to understanding genetic control of facial morphology, demonstrating that predicting facial distance traits from genetic markers is not nearly as straightforward as it is for human eye...and hair color...and that further genetic research will be needed to identify predictive genetic markers, which could achieve the accuracy needed for practical applications such as future forensics.

In other words, the genetic architecture of the traits which govern facial features are going to be more like height than pigmentation. That means forensic facial reconstruction will be a way off in the distance. But how far in the distance? A friend pointed out recently if that full genome sequences were ever associated with Facebook profiles that might be a data miner's dream come true. The way is already out there, the key is the will, ethical and computational.