A new study shows how putting candy far from the checkouts makes people buy less of it. 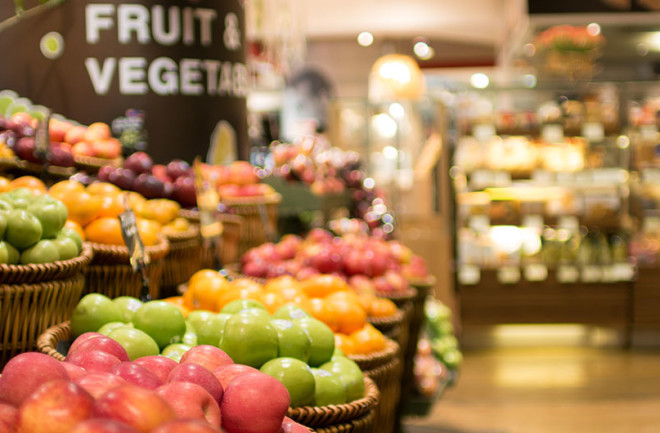 (Inside Science) — It doesn't take much to nudge people into making healthier choices at the grocery store -- just removing confectionery and other unhealthy products from checkouts and the ends of nearby aisles and placing fruit and vegetables near store entrances have a real impact on what people buy. That's the key finding from a new study published last week in the journal PLOS Medicine.

Very few people in the U.K. (and around the globe) eat enough fruit and vegetables, said Christine Vogel, a public health nutrition researcher at Southampton University, who co-authored the study. Instead of blaming consumers or the cost of fresh food, Vogel said, she is really interested in looking at the food environment -- the places where people get their food, especially supermarkets where many families buy most of what they eat.    Vogel and her colleagues focused on the food choices made by women of childbearing age. Some of their early findings showed that the food environment was important, particularly for women who had poor dietary choices. Vogel reached out to a discount supermarket chain called Iceland, which she said is quite heavily used by families who are more vulnerable economically and by younger adults who tend to have poorer quality diets. She pitched them a plan to change the store layout slightly to encourage the purchase of healthy food.

In the study, the chain removed confectionery items from the checkouts and from the ends of the aisles near the checkout areas in three stores for six months each. Instead, they stocked those areas with nonfood items like deodorant, water, and toothpaste and expanded the fruit and vegetable sections near the entrances of the stores. They compared the buying habits of consumers at those stores with those of consumers at stores that made no change but had similar clientele.

The study also tracked customers that use the supermarkets regularly, analyzing loyalty card data to see what they placed in their shopping baskets. The researchers tracked them over nine months and found that the women -- whom the researchers focused on because they often are the ones who purchase food for a household -- who shopped at the healthier stores purchased more fruit and vegetables, and this also translated into a healthier diet when they answered surveys about what they were eating. Vogel said the findings provide some additional support for the U.K. government's intention to ban the sale of foods high in fat, salt or sugar at the front of the store, because it will reduce the number of occasions that customers can interact with those foods. Other interventions, like adding signage about healthy options, has a far smaller effect in studies, Vogel said.

The findings from the study affirm other research suggesting that food environments matter and supermarkets can do more to encourage healthy choices without compromising the bottom line, said Allison Karpyn, who co-directs the Center for Research Education and Social Policy at the University of Delaware. "Oftentimes small changes in supermarkets such as placing products in a different part of the store, or on a different shelf, or with a larger tag, can result in significant shifts in what shoppers buy -- often without the shopper even realizing it," she said. "And while the results might seem modest, if you multiply impacts across communities, the potential to improve public health is large."

Vogel said the next steps in her research include more digging into the effect of placing nonfood items at the checkout, since that's where many impulse purchases are made. Reducing impulsive purchases, she said, "is a way to reduce the opportunity for individuals and families to have added unnecessary calories."