He Became Depressed and His Sex Drive Disappeared. What Was the Cause?

‘Everything was fine’ for this salesman, but he couldn’t shake his funk. His hormones may have had something to do with it. 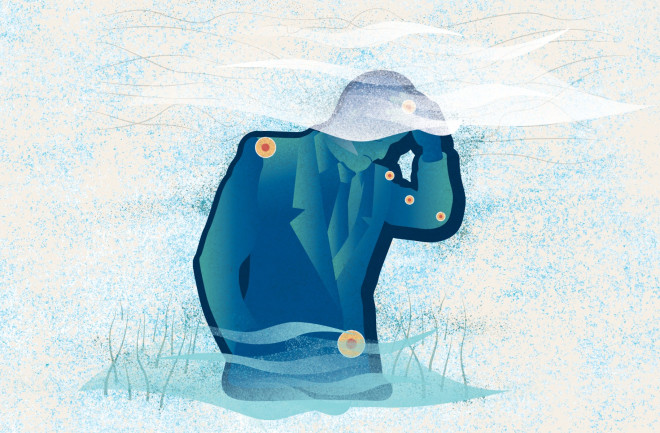 This article appeared in the November 2020 issue of Discover magazine as "Beyond the Blues." Subscribe for more stories like these.

Reggie, a 30-year-old pharmaceutical salesman, appeared in my office one afternoon to follow up on his cholesterol levels and other routine bloodwork. While the tests were all normal, I noticed he seemed to be in a bit of a funk, for lack of a more scientific term. Ordinarily an upbeat and positive person, he seemed to be down in the dumps. When I asked if anything was going on at home or at work, he said everything was fine. Still, he couldn’t deny that he did not feel like himself.

“It’s hard to describe,” he told me. “Everything is fine, and I should feel fine, but I don’t. My marriage is fine, my kids are doing well in school, and I have money in the bank.” Nonetheless, Reggie told me that sometimes he got confused for no reason and he felt tired all the time. Plus, his muscles and joints ached. “It all came on out of nowhere a few weeks ago and I can’t seem to shake it,” he continued. “At first, I thought I had the flu, but I don’t.”

I immediately thought he may have thyroid troubles. The thyroid gland, located in the neck, produces a hormone known as thyroxine, which has a profound effect on a person’s overall metabolic rate. When the thyroid gland produces too little thyroxine — a condition known as hypothyroidism — patients often describe a similar set of symptoms. Confident that I had nailed the diagnosis, I ordered blood tests to check his thyroid. A few days later, the results came back, and I was stunned to see they were perfectly normal. Scratching my head, I asked Reggie to return to my clinic for more tests.

He told me his symptoms had not improved. He’d had an episode of what he called “brain fog” on an important conference call for work, performed poorly and been deeply embarrassed. I asked about any other symptoms he hadn’t mentioned before. He told me that “nothing was fun anymore.” Movies and TV shows that he liked now bored him, and music that he usually liked listening to sounded grating to his ears.

When people don’t experience pleasure, it is known as anhedonia — often a sign of depression. But Reggie insisted he didn’t feel sad in the usual sense of the word. “I don’t feel sad or depressed,” he told me. “I just don’t feel anything at all.” Lastly, in hushed tones, Reggie said he was having trouble getting and maintaining erections, something he had never experienced before. “I feel like an 80-year-old man in a 30-year-old body,” he lamented.

Changes in mood and sex drive can sometimes suggest a neurologic problem. But Reggie’s neurologic exam was normal. To be safe, I ordered a CT scan of his brain; it was also perfectly normal. One evening, I was alone in my office and thinking about possible side effects. I went through his list of medications, one by one, and saw nothing worrisome until I noticed something: A few months ago, Reggie had started taking finasteride.

Finasteride is a 5-alpha reductase inhibitor; these types of drugs can affect the way hormones are processed and transformed by our bodies. The male sex hormone testosterone helps men build muscle and have a healthy sex drive, but it also produces hair loss in genetically susceptible individuals. Finasteride blocks the conversion of testosterone to its more potent cousin, dihydrotestosterone (DHT). High levels of DHT can cause hair loss, so drugs that halt that hormone’s production can help combat it.

Reggie had obtained his finasteride from an online pharmacy after he’d noticed his hair was falling out and became worried about his appearance. Since taking the drug, his hair loss had largely stopped. In addition, he told me that he was definitely starting to see some new hair growth — a welcome sight.

But finasteride, while highly effective, is also a controversial drug. Not long after it was released commercially, some users began to complain of a plethora of symptoms not unlike Reggie’s. Patients could develop neurologic, sexual, emotional and musculoskeletal symptoms that, strangely, sometimes persisted for months or even years after stopping the drug. When symptoms continue even after stopping finasteride, patients are referred to as having post-finasteride syndrome, or PFS.

The fact that the most common side effects from the drug are sexual — and that these could be long-lasting — has scared many patients off from even trying it to treat hair loss. The medical literature on finasteride is also far from clear; some studies of finasteride have documented these side effects, but others have not. Plus, patients who have good results on finasteride swear by it in online hair loss forums, while those who feel it has harmed them deride it as poison on those same sites.

Most men who take finasteride have no side effects at all. And those who do develop issues usually see them resolve after stopping the drug. Still, some who take finasteride do experience long-lasting side effects. In part, this may have something to do with anxiety about using the drug in the first place: If you read online that a drug can help regrow hair but can also cause impotence, you may be more likely to subjectively feel like you’re having a sexual side effect.

Regardless, the symptoms Reggie was describing to me sounded like they could be attributed to the adverse side effects of finasteride.

I reviewed all of this with Reggie at his next visit. He looked skeptical. I then suggested he stop taking his finasteride. He immediately refused. “No way,” he angrily told me. “Forget about it. Seeing all of that hair in my hands when I shampooed each morning was the worst. It was all I could think about for the rest of the day. I’ve lost so much hair in the past year, and now I’m finally starting to get it back.”

I understood where he was coming from. I had experienced more than a little hair loss myself and knew how upsetting it could be. Still, I was worried about him. I suggested he think on it, read about finasteride’s side effects and PFS, and see me in a week. He agreed, but he left my office that day more upset than when he arrived.

Reggie returned the following week. He had done a lot of research about finasteride, even going so far as joining an online message board to discuss his symptoms. “I have to admit,” he said, “a lot of those other guys on the message board sounded just like me.” With a sigh, he told me he would try stopping his finasteride for a while.

Two weeks later, Reggie came back to see me. His mood was better, he had more energy, his aches had faded, and his libido was returning, though admittedly not as quickly as he would have liked. It seemed the finasteride was the culprit. Still worried about balding, Reggie had started taking minoxidil, the other FDA-approved treatment for hair loss. It wasn’t as strong of a hair loss drug as finasteride, but at least it was something. Weighing the pros and cons of finasteride, he decided he had more to lose by taking the drug than he stood to gain — even on top of his head.

Douglas G. Adler is a gastroenterologist and professor at the University of Utah School of Medicine. The cases described in Vital Signs are real, but names and certain details have been changed.