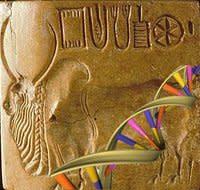 Zack is going to post the first batch of results from HAP tomorrow. It looks like he's going to be using mostly the merged HGDP, HapMap, SVGP, and Behar data set, supplemented by a second set which also merges the Xing et al. sample (the intersection of Xing et al. with the other results is a much smaller number of SNPs, but, it includes a better coverage of various South Asian groups). He'll initially be posting ADMIXTURE estimates as you've seen on Dodecad. I'm especially interested in the Anglo-Indian and Roma individuals which have sent Zack their samples. I don't know of any genomic investigation of the former community, while the published research on Roma genetics doesn't include SNP-chip results (usually they're mtDNA, Y, or only a few autosomal markers). I'd be curious for possible evidence of homozygosity or linkage disequilibrium in the Roma individual due to the population bottlenecks which other studies have detected (I assume that'll be in the future). The Roma are to a good approximation an admixture of India, West Asia, and European (often Balkan) groups, but, their history of endogamy and small founding groups experience rapid demographic expansion, are also critical to remember. Here is the regional breakdown so far:

He swapped my parents in for me. My father will be HRP0022, and my mother HRP0023. I am HRP0002 (there will be some results where I am included, though I won't be in the "founder" runs since I am just a combination of my parents). Remember, 23andMe now comes in to $260 a year ($199 up front, $5/per month for 1 year). It looks like now that the V3 analyses will probably have a 4-5 week turnaround. Though the Indian Diaspora probably can afford these costs, one worry I have is an underrepresentation of Dalits and tribal people in these communities (though some of the public samples include these, the tribals especially exhibit evidence of peculiarities due to genetic drift, so extrapolating from a few tribes might be very problematic in terms of representativeness). Gujarat is covered by the HapMap, and Pakistan is well covered by the HGDP. SVGP and HAP seem to have Tamils covered well too. What is really missing are the vast swaths of the center-north, which aren't in the public data sets or HAP. Here's how to get involved. And the Facebook page. Finally, I know some people have been checking in somewhat obsessively, but just subscribe to the RSS. You never know when Zack's daughter will monopolize the box on which ADMIXTURE is running, postponing the reporting of results!