Hacking the Microbiome for Fun and Profit: Can Killing Just One Mouth Bacterium Stop Cavities? 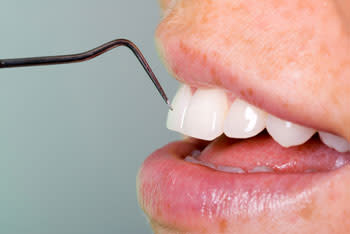 What's the News: The bacterial hordes that call your mouth home---and yes, even if you brush rigorously, you've got 'em---are generally a pretty benign bunch. Mostly they just mooch around, snagging tastes of whatever you're eating, but Streptococcus mutans

, the bad boy that causes cavities, releases tooth-corroding acid whenever you eat sugar. Even mouthwash that kills everything it touches can't save you from the ravages of S. mutans in the long term; it just grows back, along with the rest of your bacteria. Scientists who study the mouth microbiome

, however, think that a mouthwash that kills S. mutans and leaves the rest of the bacteria to take over S. mutans's real estate could spell the end of cavities. In a small clinical study

last year, one team found that one application of the mouthwash knocked down S. mutans levels, and that harmless bacteria grew back in its place. If the mouthwash pans out, it could join the ranks of an emerging new type of treatment: better living through hacking the microbiome. How the Heck:

The Future Holds: The next step is to try a much larger experiment of similar design, and should that produce similar results, deal with these pressing questions: How long do the effects last? Can the newly healthy bacterial community withstand repeated attacks from S. mutans invaders? And how long would it take for S. mutans to develop a resistance?Reference: Sullivan, et al. Clinical Efficacy of a Specifically Targeted Antimicrobial Peptide Mouth Rinse: Targeted Elimination of Streptococcus mutans and Prevention of Demineralization. Caries Res. 2011; 45(5): 415–428. Published online 2011 August 19. doi: 10.1159/000330510