Guzzling Too Many Energy Drinks Can Cause Hepatitis 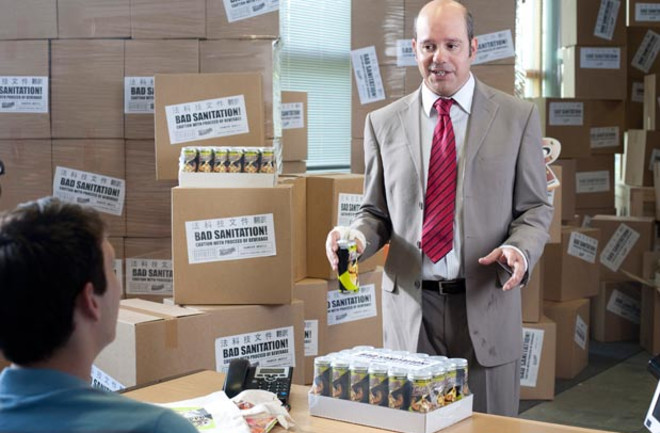 In the first season of the IFC television series, "The Increasingly Poor Decisions of Todd Margaret," the main character, Todd Margaret, needs to sell an obnoxious inventory of Thunder Muscle. (Credit: AMC Networks)

In the United States, most people work more than the not-so-standard 40-hour workweek, and energy drinks are an increasingly popular way to power through 10-hour days and reach the finish line.

But take it easy on those Red Bulls, Monsters and 5-Hour Energy bottles — your liver will thank you. Case in point: Doctors at the University of Florida report what they believe to be the second documented case of acute hepatitis brought on by chugging too many energy drinks.

The patient was a 50-year-old, otherwise healthy, man who had been nagged by abdominal pain, vomiting and drowsiness for a few weeks. He brushed it off as flu-like symptoms, but grew alarmed after he noticed darkened urine and signs of jaundice. After visiting with doctors, he was promptly diagnosed with severe acute hepatitis.

Doctors ruled out drugs, alcohol and sexual behavior as causes, and tests revealed this wasn’t a typical viral hepatitis infection. However, levels of B vitamins — used as “energy blends” in beverages — in his liver were literally off the charts. Sure enough, the patient told doctors he had been consuming four to five energy drinks daily, for three weeks straight, to get through his labor-intensive days as a construction worker.

He was treated and released after spending three days in the hospital. The cure was simple: he stopped downing energy drinks. His doctors published a detailed case report Tuesday in the British Medical Journal.

Energy drinks contain a host of B vitamins, but the patient’s toxicity profile clearly indicated an overdose of Vitamin B3, also known as niacin.

Niacin is used pharmaceutically and in supplements to treat high cholesterol and reduce the risk of heart attack by improving circulation. If you don’t get enough niacin, it can cause pellagra, a nasty condition characterized by cracked, scaly skin, dementia and diarrhea.

Like all the B vitamins, niacin helps convert carbohydrates into glucose — the body’s fuel. That’s why energy drinks are loaded with them. But, like all things, too much niacin can be trouble.

Typically, a daily 500-milligram dose of niacin is considered toxic, and doctors recommend routine liver tests if you consume more than 100 mg per day. The patient in this case was consuming roughly 160 to 200 mg (40-50 mg per drink) every day over a three-week period.

Not the First Time

In 2011, a 22-year-old woman who was consuming 10 cans of an energy drink daily was the first documented case of acute hepatitis caused by too many energy drinks. Doctors in that case also suspected niacin as the culprit.

Herbal supplements and energy drinks are ubiquitous on store shelves and checkout counters today. The estimated number of dietary supplements available to consumers ballooned from 4,000 in 1994 to some 55,000 by 2012. It’s estimated that 23,000 emergency room visits each year in the U.S. are related to misusing dietary supplements — primarily weight-loss remedies and herbal energy products.

Doctors aren’t absolutely certain if niacin bore all the blame for the construction worker’s liver woes, as other ingredients in energy drinks might interact in unexpected ways. However, they say this second instance serves to bring more attention to an often unrecognized phenomenon.