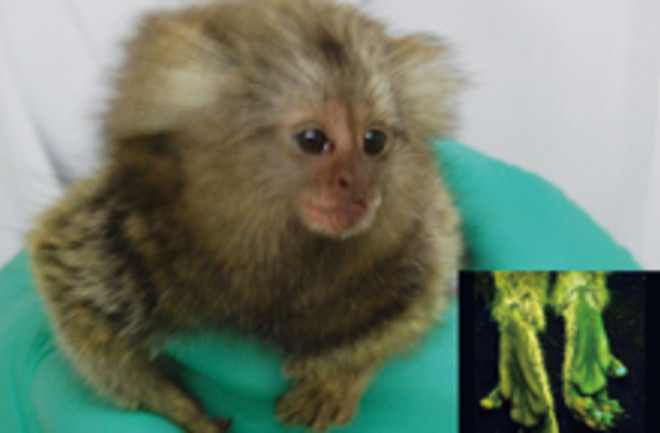 Five small monkeys that glow green under ultraviolet light are providing a beacon for medical research. Researchers introduced a jellyfish gene that codes for a fluorescent protein into the embryos of marmosets, and found that the resulting monkeys expressed the gene in all the cells of their body, including their egg and sperm cells--which means the genetically engineered primates can naturally pass on the foreign trait to their offspring. While creating a family of glowing monkeys doesn't have obvious benefits for medical science, researchers say the study was really just a proof of concept.

Researchers have added genes to rhesus macaques before, but the new work with marmosets is the first to document that monkeys can pass an inserted gene along to future generations. That's important because it opens the door to creating colonies of such "transgenic" monkeys by breeding, which would be far simpler than the cumbersome process of making each animal from scratch by inserting genes into embryos [AP].

Now that researchers have mastered the technique, they hope to create transgenic monkeys that carry genes associated with such diseases as Parkinson's and Lou Gehrig's disease. For the study, published in Nature, a research team led by geneticist Erika Sasaki

injected a virus, called lentivirus, into marmoset embryos. The virus carried the gene encoding an enhanced version of green fluorescent protein or GFP, which the virus inserts into the marmosets’ genome [Science News].

Although 80 transgenic embryos were implanted into 50 marmoset females, only seven of the monkeys became pregnant, and three miscarried during their pregnancies. The four remaining surrogate mothers gave birth to five healthy infants (including one set of twins), and four of the five babies expressed the gene throughout their bodies. One went on to father a healthy baby that also carried the foreign gene. “The birth of this transgenic marmoset baby is undoubtedly a milestone,” wrote developmental biologists Gerald Schatten and Shoukhrat Mitalipov in a commentary that accompanied the study.

Mice are currently used as models for many human diseases, but are not ideal for studying brain disorders. “The mouse doesn’t give the answers to all the questions we need answered,” Mitalipov says. “There are lots of diseases that can only be modeled in primates” [Science News].