These wee green kittens not only glow, they're resistant to the feline version of HIV.

Scientists exploring possible treatments for HIV have, purely as a byproduct of their methods, earned themselves a spot in today's science blog postings: They've made glowing kittens

. When these green kitties were still twinkles in their parents' eyes, scientists investigating a macaque gene thought to protect monkeys against feline immunodeficiency virus (FIV) inserted it into cat eggs with a lab-grown virus, intending to test whether cats carrying the gene were resistant to FIV as well. Researchers are interested in seeing how the macaque gene guards against FIV, which is the feline version of HIV, in hopes of transferring their insights to combating HIV. But here's where things get wacky: The team also included in the virus a jellyfish gene that makes a glowing green protein, to act as a signal. The virus does not always succeed in transferring the genes entrusted to it, but by including the jellyfish gene, the team gave themselves an easy way to tell when the transfer took place: kittens that glow green under fluorescent light, showing that they carry the jellyfish gene, almost certainly carry the macaque gene as well. 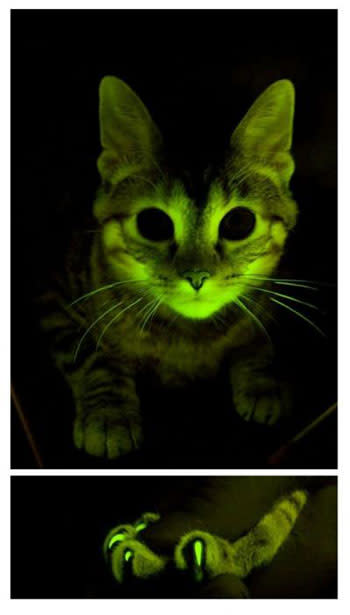 The green kittens grew up into green cats, whose claws, in particular, show high levels of green protein.

The eggs were fertilized with sperm from a non-fluorescent tomcat and implanted in female cats, and five fluorescent green kittens were born, out of a total of eleven embryos (three now survive, as one was stillborn and another died during birth). That overall 23% success rate is surprisingly large

, since the only other proven way to make transgenic cats, adding new genes to a nucleus from a non-egg cell and then swapping it into an egg, has a success rate of only 3%. What's more, when the kittens with the macaque gene were infected with FIV, the virus had trouble replicating

, suggesting that whatever the gene is doing, it can do it in cats as well as monkeys. Next on the agenda: finding out what, exactly, the mechanism is. Fluorescent reporter genes are a fairly common way to make sure that your gene transfer "took"---we've seen glowing pigs, monkeys, and mice before

. But that doesn't mean it isn't an amazing effect. If someone offered us a glowing, FIV-resistant kitten for our office, we wouldn't say no. 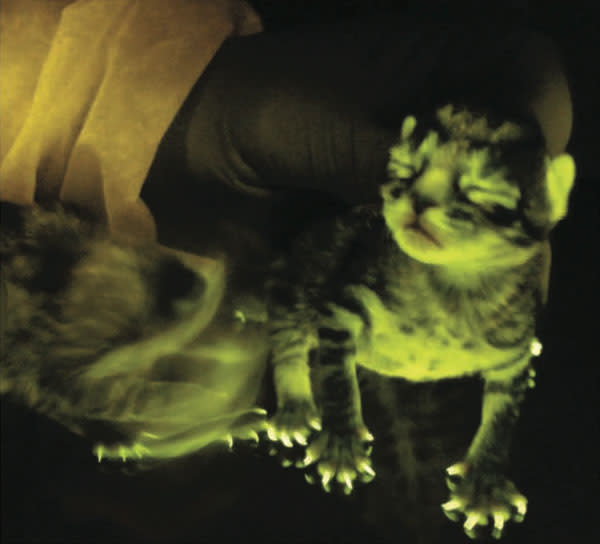