Healing touch and other energy-based therapy is entering conventional hospitals. Can biofold manipulation and "subtle energy" research validate them as medicine? 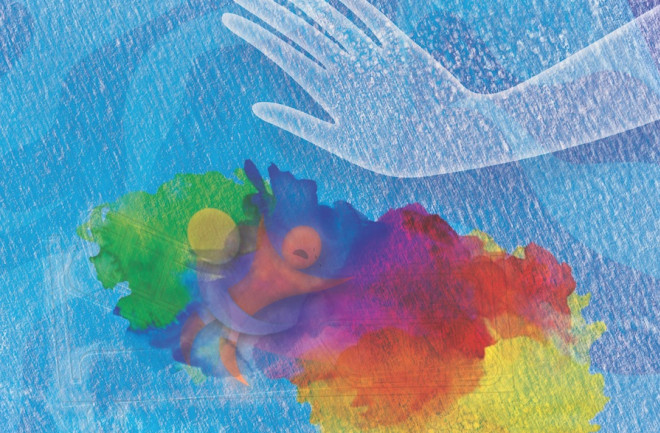 When he was 14 months old, my son’s breathing sounded like a diesel engine. He choked on peas, couldn’t clear mucus from his throat and struggled to get a full breath. Jack had a double aortic arch, a condition where an extra branch stemming from the heart constricts the airway like a vise.

During surgery to cleave the arch, doctors nicked some nerves, causing Jack’s lymphatic system to leak. After days of food and water restrictions, he looked like a caged animal. His frantic pleas for “wa-wa” played on a loop throughout the hospital wing and reverberated through my heart.

Instead of water, doctors delivered potent pharmaceutical cocktails to sedate him. After 48 hours without relief, a nurse suggested we try Healing Touch, a complementary therapy that’s supposed to help the body heal through near-body contact or physical touch.

Desperate and with little to lose, I dismissed the woo-woo alarms in my mind and accepted a session. I sat in a recliner with Jack in my arms and watched as Lisa Thompson, a pediatric nurse at Rady Children’s Hospital in San Diego, began moving her hands a few inches above us. Within minutes, beeping machines quieted. Jack’s heart rate steadied. For the first time in 10 days, we both caught our collective breath, and Jack fell asleep. During the 30-minute session, Thompson’s hands never even made contact with Jack’s body. I felt equal parts confused and relieved.

Developed in the early 1980s by Colorado nurse Janet Mentgen, Healing Touch is rooted in the idea that near-body or light touch can support the body’s ability to heal. While it remains on the fringe of mainstream medicine, the Mayo Clinic, Memorial Sloane Kettering and more than 30 percent of America’s Veteran Administration (VA) hospital system have incorporated healing-touch therapies into conventional treatment to comfort patients.

Still, scientists can’t fully explain the mechanisms behind this practice, or outcomes like my son experienced. But some physicians, psychologists and controlled studies have made compelling guesses about what might be happening below the surface.

During ancient times, “laying on of hands” served as first-line therapy for people who were suffering. Today, these same energy-modulating practices are beginning to find a place in modern medicine, particularly where effective treatments remain elusive.

The term “biofield therapies” was coined at a National Institutes of Health meeting in 1992. This family of treatments includes ancient Chinese therapies like acupuncture and Qigong, as well as more recently developed practices such as reiki (which originated in Japan) and Healing Touch. “These therapies are based on the idea that the body has a biofield system, not unlike the circulatory, nervous and lymphatic systems,” says Mimi Guarneri, a cardiologist and president of the Academy of Integrative Health and Medicine in San Diego.

The biofield isn’t as out there as it may sound. In modern medicine, doctors use electroencephalograms (EEGs) to study brainwaves and electrocardiograms (EKGs) to assess heart health. Both tests measure parts of the biofield by placing electrodes on different areas of the body and interpreting electromagnetic output. We even have devices that measure body temperature a foot away from skin.

Biofield descriptions also include what Shamini Jain, a psychologist at University of California, San Diego, and founder of the Consciousness and Healing Initiative, calls “subtle energy,” such as prana and chi, terms that have translated to “life force” in India and China for thousands of years. Studying that type of energy is more complicated and difficult to measure.

“If I put on my hard-core scientist hat, we don’t know what’s happening,” Jain says. “But with Healing Touch, we see positive changes in mood and physiology that matter for patients.” In studies, those changes have ranged from self-reported reductions in pain and anxiety to increased natural-killer cell function during cancer treatment.

A 2021 study of 120 women with osteoarthritis published in the International Journal of Rheumatic Diseases, for example, found that those who received energy healing reported significant reductions in pain compared to those who didn’t receive the therapy. Jain also reported positive findings in a randomized, placebo-controlled trial published in Cancer in 2012. With 76 breast cancer survivors split into three unique groups, those who received energy healing showed statistically significant reductions in fatigue. That same group also had notably improved cortisol rhythms, compared to those who received mock healing and no treatment.

These studies, and others with similar results over the years, probe the question: Is it all in the head of the recipient?

To bypass placebo effect, Shin Lin, a biomedical scientist and director of the Laboratory for Mind-Body Signaling & Energy Research at University of California, Irvine, has analyzed how energy affects cells in a petri dish. He says that when you apply a direct-current electric field powered by a battery at about 1 volt per meter, a range the body can emit, the cells on the plate change and migrate. You witness a similar effect of electrical energy when your hair stands up after brushing dry hands on a wool sweater. While that force may be at work when we touch someone, Lin says that energy from a human healer can’t possibly exert enough power to change a patient’s physiology without physical contact.

In his view: “Positive research findings on Healing Touch are a product of the placebo effect, meaning the treatment may impart benefits, but only because people believe it works.” Research confirms that placebo treatments can produce measurable physiological changes. These might include modified heart rate, blood pressure and cortisol levels, all from the catalyst of our mind. But I’m left wondering how that might have applied to the mind of my barely-1-year-old son.

Other experts, along with plenty of studies controlling for placebo, suggest different mechanisms could be at work in biofield therapies. Modulating the body’s stress and relaxation responses is one of them. We know the body is built to heal itself, but barriers like anxiousness, malnutrition and sleep deprivation inhibit that, even with the best medical treatments. “[Healing Touch] allows us to calm people down and position the body in the best place for healing,” Guarneri says.

Thompson says that a sense of calm is the most common outcome in her patients. “In fact, a lot of people fall asleep,” she says. In that relaxed state, modern treatments are also rendered more effective.

A 2020 study of 39 combat veterans with post-traumatic stress disorder published in Psychological Trauma lends potential support to this theory. In the study, veterans who received a series of 10 Healing Touch treatments, just like the one Jack received, reported clinically significant reductions in symptom severity, along with a range of positive physical and psychological effects.

When Jack was hospitalized, Rady Children’s Hospital offered parents Healing Touch classes at a discount. During 30-plus hours of training spanning two weekends, I learned techniques and practiced them on other students. The truth is, I’m not sure I did anything on the biological level. I am sure, however, that I looked bizarre.

Nevertheless, I began turning to Healing Touch to quiet feelings of helplessness when a loved one was unwell. I used the technique on Jack post-surgery. I used it on my dad when an infection infiltrated his heart, and later while he was dying. Even my skeptical husband says he feels less stressed after a session. In every case, it made me feel closer to those who were suffering. I’m not alone here, either. Studies show that nurses who practice biofield therapies experience stress relief, improved immune function and a greater sense of connection to their patients.

Recently, when a stomach bug ravaged our household, I found myself on familiar ground: at a children’s hospital with one of my sons. This time, I didn’t feel powerless, and I didn’t care that I looked ridiculous. I called to mind a tree, rooted my feet into the ground and put my hands to work.