Got Wrinkles? Smear on the Hottest New Fashion Toxin...Snake Venom! 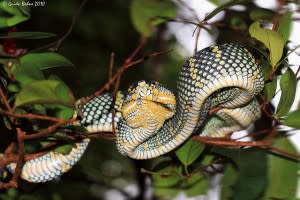 Worried about wrinkles, laugh lines, or crow's-feet adding years to your wizened countenance? Worry no longer, friend—now you can apply synthetic viper venom to your face... for a price. The product, called Syn-Ake, contains a peptide that mimics the effects of Waglerin-1, a toxin found in the venom of the temple pit viper. It works by temporarily paralyzing facial muscles, binding to receptors (called nicotinic acetylcholine receptors) on the muscles and preventing them from being stimulated and contracting. This has the effect of reducing certain small wrinkles in the short term, according to the sole available study on Syn-Ake, performed by the company that markets it, Switzerland-based Pentapharm. And now, according to the Daily Mail, you can buy a tiny bottle of it for only $60 to gingerly bless your wrinkly visage. It's the same basic principle as Botox, except that Botox usually involves injection, lasts longer, and is generally more invasive. Both products work by incapacitating a few of the muscles you use to smile, frown, and laugh, which after years of use and tightening create wrinkles by drawing your skin together into folds the way drapes gather along a curtain rod, as succinctly put in a post at Livestrong. Thus paralyzed, the muscles relax, which may smooth wrinkles. But this also means you literally can't express yourself as well, as shown in one 2010 study. That said, Waglerin-1 only reversibly binds to receptors and is likely to be very short-acting, according to researcher Joseph McArdle, who studies Waglerin-1. The substance has also been shown to be most effective in mice, a prey animal, and is about 1,000 times less effective in other mammals, like humans. That means you'd probably need a very high concentration of the chemical to have an affect. As you might guess, McCardle doesn't recommend Syn-Ake. "My reasoning is not just lack of toxicologic knowledge but also the lack of data showing actual effectiveness," he said. "Besides, wrinkles can be sexy." So, should you rush to the nearest store or website to get some snake potion for the old face? I wouldn't, but that's only because it seems like a bad idea to shell out a lot of money to put a synthetic viper toxin derivative on your skin, one which has barely been studied at all, for an unlikely short-term gain. [via Daily Mail]