Got gas? Before you blame your diet, read this. 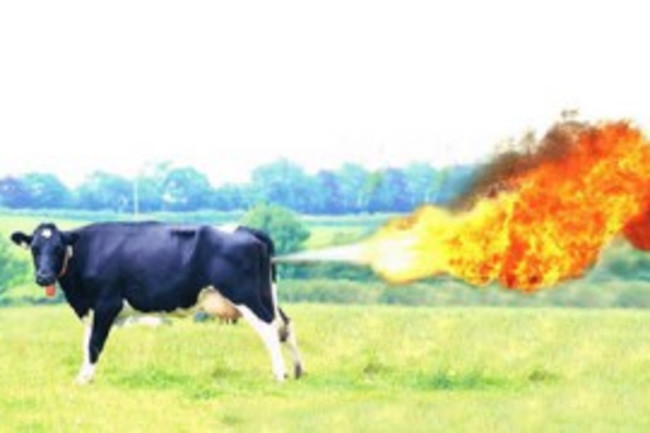 Photo: flickr/purpleslogDo you suffer from excessive "anal gas evacuation" (scientific jargon that just means 'farting')? If so, your gut bacteria might be contributing. The authors of this study looked at the differences between patients complaining of flatulence compared to healthy controls. They measured both the number and volume of "gas evacuation" episodes (see below for more details, if you're into that kind of thing) from the subjects on both standard and "flatogenic" (fart-producing) diets. One big difference between the two groups was that the species of bacteria in flatulent patients changed much more when the patients ate the flatogenic diet, whereas the bacterial communities in the controls remained stable. In fact, specific bacteria were correlated with increased numbers of gas evacuations and increased gas volumes in those patients. So there you have it: apparently, not all farts are created equal.Anal gas evacuation and colonic microbiota in patients with flatulence: effect of diet "Objective To characterise the influence of diet on abdominal symptoms, anal gas evacuation, intestinal gas distribution and colonic microbiota in patients complaining of flatulence. Design Patients complaining of flatulence (n=30) and healthy subjects (n=20) were instructed to follow their usual diet for 3 days (basal phase) and to consume a high-flatulogenic diet for another 3 days (challenge phase). Results During basal phase, patients recorded more abdominal symptoms than healthy subjects in daily questionnaires (5.8±0.3 vs 0.4±0.2 mean discomfort/pain score, respectively; p=<0.0001) and more gas evacuations by an event marker (21.9±2.8 vs 7.4±1.0 daytime evacuations, respectively; p=0.0001), without differences in the volume of gas evacuated after a standard meal (262±22 and 265±25 mL, respectively). On flatulogenic diet, both groups recorded more abdominal symptoms (7.9±0.3 and 2.8±0.4 discomfort/pain, respectively), number of gas evacuations (44.4±5.3 and 21.7±2.9 daytime evacuations, respectively) and had more gas production (656±52 and 673±78 mL, respectively; p<0.05 vs basal diet for all). When challenged with flatulogenic diet, patients’ microbiota developed instability in composition, exhibiting variations in the main phyla and reduction of microbial diversity, whereas healthy subjects’ microbiota were stable. Taxa from Bacteroides fragilis or Bilophila wadsworthia correlated with number of gas evacuations or volume of gas evacuated, respectively. Conclusions Patients complaining of flatulence have a poor tolerance of intestinal gas, which is associated with instability of the microbial ecosystem." Bonus excerpt from the Materials and Methods: "Number of anal gas evacuations The number of gas evacuations per anus was measured using an event marker (DT2000 Memory Stopwatch, Digi sport instruments, Shanggiu, China) during each study phase. Participants were instructed to carry the event marker during daytime and to register every evacuation of gas per anus. Previous studies measuring the number of gas evacuations simultaneously by an event marker and continuous recording of anal gas evacuation showed a very good correlation. Volume of intestinal gas produced after a test meal Gas collection tests were conducted after overnight fast the fourth day of each study phase. A standard meal (either normal or flatulogenic) was administered and the volume of gas evacuated was measured for 6 h, as previously described;13 ,14 in brief, gas was collected using a rectal balloon catheter (20 F Foley catheter, Bard, Barcelona, Spain) connected via a line without leaks to a barostat, and the volume was continuously recorded. The normal meal was administered at the end of the basal phase and consisted of a glass of milk (coffee optional) and buttered toasts with marmalade (330 Kcal, 1.2 g fibre); the flatulogenic meal was administered at the end of the challenge phase and consisted of cooked beans with sausage, whole wheat bread and canned peach (874 Kcal, 26.5 g fibre)." Related content: NCBI ROFL: Farts: an underappreciated threat to astronauts.NCBI ROFL: Beans, beans, the musical fruit…NCBI ROFL: I swear I haven't been drinking, Officer. It was my gut flora!