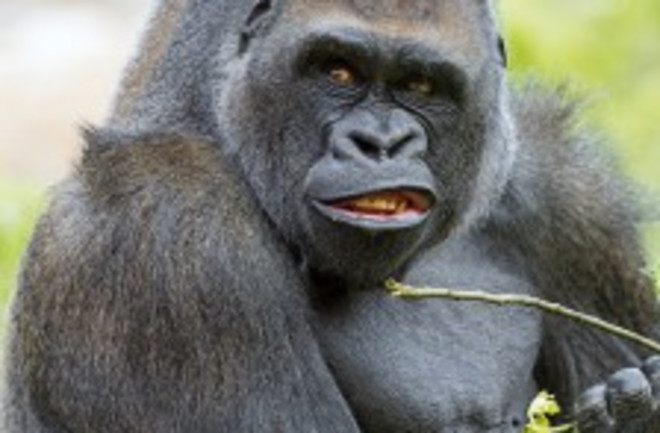 Image: Flickr/Tambako The JaguarProblem: you have a bunch of gorillas coming over for a party and you have no idea what music they like. Solution: apparently there is none. That's because, at least according to this study, gorillas have individual responses to different kinds of music. Here, researchers observed three gorillas (Koga, Sydney, and Lily) listening to rainforest sounds (natural), Chopin (classical), or Muse (rock). Although all the gorillas changed behaviors when listening to the rainforest sounds, Koga oriented toward the speakers playing Muse 40% of the time, while Sydney did it 10%, and Lily never did (graph below). Maybe next time they should try Gorillaz.The effects of auditory enrichment on gorillas. "Several studies have demonstrated that auditory enrichment can reduce stereotypic behaviors in captive animals. The purpose of this study was to determine the relative effectiveness of three different types of auditory enrichment-naturalistic sounds, classical music, and rock music-in reducing stereotypic behavior displayed by Western lowland gorillas (Gorilla gorilla gorilla). Three gorillas (one adult male, two adult females) were observed at the Buffalo Zoo for a total of 24 hr per music trial. A control observation period, during which no sounds were presented, was also included. Each music trial consisted of a total of three weeks with a 1-week control period in between each music type. The results reveal a decrease in stereotypic behaviors from the control period to naturalistic sounds. The naturalistic sounds also affected patterns of several other behaviors including locomotion. In contrast, stereotypy increased in the presence of classical and rock music. These results suggest that auditory enrichment, which is not commonly used in zoos in a systematic way, can be easily utilized by keepers to help decrease stereotypic behavior, but the nature of the stimulus, as well as the differential responses of individual animals, need to be considered."