Go Easy on the Edible Sex Toys—They May Be Poisonous 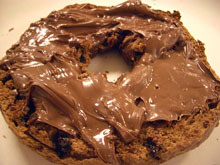 First the dogs, then the infants—it was just a matter of time before the melamine scandal would hit the adult entertainment sector.And then word came last Friday that the U.K.’s Food Standards Agency was issuing an alert against certain “novelty products” —namely, strawberry-flavored body pens and chocolate-flavored “willy spreads,” an edible balm that can be slathered on the penis.

The sex products contained levels of melamine up to 100 times over the legal limit, set at 2.5mg/kg.Melamine is a nitrogen-containing toxin that has recently been found in pet foods, baby formulas, and White Rabbit candies manufactured in China.It’s added to spike the amount of protein that shows up in food tests.

The body pens and spreads in question were made in Zhonshan, China by a company named Le Bang. Ann Summers, the British sex shop chain that carried the products, promptly pulled them from the shelves.Nevertheless, an FSA spokesperson told past users not to panic, and that the risk from these products was very low.Still, it may not be a bad idea to ditch the fruit flavors for some plain old vanilla in your sex life.