Sound familiar? Well, good things come in pairs. A few days ago I posted on a paper which used a linkage analysis to come to the conclusion that an SNP on HERC2 was responsible for the variation in eye color in Europeans. Some background, a gene, OCA2, was implicated in the variation in eye color, and it turns out that a few haplotypes on this locus can be used to predict with reasonable accuracy the phenotype in question. The paper I blogged a few days ago was a extension of the work of this work; the same group found that one SNP on HERC2 could actually better explain the variation (though there was a locus of minor affect on OCA2), and that that variation was caused by the regulation of expression of OCA2 by HERC2. Case closed, right? No, it's science, theoretically the case is always open; a continuing revelation so to speak. This paper covers the same topic, comes to similar conclusions, but explores some different methodology space:

...To date, the genetics of iris color is still not fully understood and is of interest, particularly in view of forensic applications. In three independent genome-wide association (GWA) studies of a total of 1406 persons and a genome-wide linkage study of 1292 relatives, all from the Netherlands, we found that the 15q13.1 region is the predominant region involved in human iris color. There were no other regions showing consistent genome-wide evidence for association and linkage to iris color. Single nucleotide polymorphisms (SNPs) in the HERC2 gene and, to a lesser extent, in the neighboring OCA2 gene were independently associated to iris color variation. OCA2 has been implicated in iris color previously. A replication study within two populations confirmed that the HERC2 gene is a new and significant determinant of human iris color variation, in addition to OCA2. Furthermore, HERC2 rs916977 showed a clinal allele distribution across 23 European populations, which was significantly correlated to iris color variation. We suggest that genetic variants regulating expression of the OCA2 gene exist in the HERC2 gene or, alternatively, within the 11.7 kb of sequence between OCA2 and HERC2, and that most iris color variation in Europeans is explained by those two genes....

Phew. That's it? A chart from the paper can actually illuminate the dark weeds of this verbiage....

The chart is a little blurry obviously, sorry about the resolution. But the key is that there are two stages, and the first stage includes a linkage study. There are two broad groups, a large sample from Dutch women from Rotterdam, and a smaller sample drawn from a well known inbred family study group. 10 women who were genetic outliers were excluded from the Rotterdam sample, so they attempted to remove the issue of population substructure from the equation (and inbred family group handles this problem well, ergo, the linkage study). They found, as noted in the abstract, association signals out of the 15q13.1 region of the genome (on chromosome 15), and specifically around HERC2 & OCA2. Sound familiar? In fact, there were the only replicated associations they found (there was one association on chromosome 1 which the couldn't replicate). There didn't pick up any associations on other loci previous implicated, SLC45A2, ASIP, TYRP1 and so on. These are generally pigmentation genes, so the decoupling of eye color from skin color as a whole might explain why relatively dark-skinned people can still have blue eyes (the locus for eye color, OCA2, does have some affect on skin color, so that the blue eyed should be fairer, ceteris paribus). 3 SNPs, rs916977 on HERC2 and the 3 SNPs already associated with the haplotypes on OCA2 from the earlier study. Since these were already associated with eye color in phase 1, no surprised that they 3 out of 4 SNPs showed associations in phase 2 (rs649728 was discarded). That being said, the HERC2 marker was the most informative. Interestingly, the HERC2 marker exhibited epistasis with the 3 OCA2 SNPs, that is, gene-gene interactive effects outside of the preview of a linear model. Instead of the familiar r^2 values you get from regression models the authors here used the area receiver operating characteristic curve, or AUC. An AUC of 0.5 means that there is no discrimination power from a predictor (i.e., SNP state) to a trait (i.e., eye color), while 1.0 implies perfect discrimination. Using the remaining SNPs the group found that there AUC for prediction of brown eye color was 0.80 and 0.82 for the Rotterdam group phase 1 & 2 and 0.78 for the inbred family group. For blue eye color the respective values were 0.79, 0.79 and 0.75. If one carried the CC genotype on rs916977 on HERC2 one had a 10.3% probability of having bron eyes. For a CT genotype, a heterozygote, the probability was 63.3%. For a TT genotype the probability was 84.7%. Though this seems to show some dominance effects, do note that their phenotypes were binned into three groups, blue, intermediate and brown. As they note that might have reduced their statistical power. 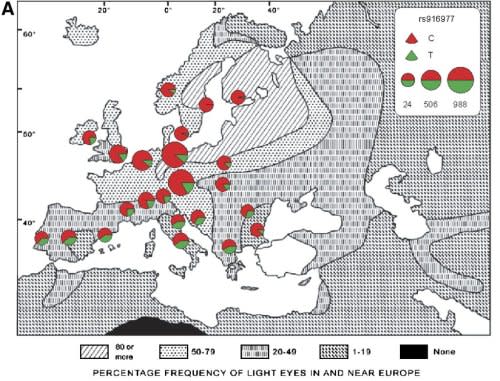 (courtesy Dienekes) The map is pretty self-explanatory. It is a a list of pie charts which display alleles frequencies for the HERC2 SNP in various European populations, superimposed upon an older 1960s map of the the variation in eye color. They found an r^2 of 0.59, so most of the variation in eye color could be explained by the SNP in question. So they neatly extrapolated from the their findings within the Dutch population to a nice geographic scale. Here's part of their conclusion:

To date, we have no data on the functionality of HERC2 rs916977. The function of the HERC2 gene is still largely unknown. This gene encodes the HECT domain andRCC1-like domain containing protein 2 (or probable E3ubiquitin-protein ligase HERC2) involved in protein trafficking.HERC2 might play a structural role in the genome and was identified as ancestral gene in regional duplication events leading to Prader-Willi syndrome...and Angelman syndrome...in humans.36–38 Noteworthy, hypopigmentation is commonly described in both Prader-Willi as well as Angelman syndrome.39–41 The OCA2 gene, located 11.7 kb from theHERC2 gene, is known to be involved in oculocutaneous albinism Type II and encodes the P-protein.

The most likely interpretation of our findings is that genetic variants regulating expression of the OCA2 gene exist in the HERC2gene or, alternatively, within the 11.7 kb of sequence between the OCA2 and HERC2 genes.

Examples of regulatory elements located distant of the regulated gene are known.

Sound familiar? Right, the other group did offer up a functional model where a SNP on the distal region of HERC2 acts as a of OCA2. Here's the important part from the abstract of that paper:

Comparison of sequence alignments of multiple species showed that this SNP lies in the center of a short highly conserved sequence and that the blue-eye-associated allele (frequency 78%) breaks up this conserved sequence, part of which forms a consensus binding site for the helicase-like transcription factor (HLTF)...We conclude that the conserved region around rs12913832 represents a regulatory region controlling constitutive expression of OCA2 and that the C allele at rs12913832 leads to decreased expression of OCA2, particularly within iris melanocytes, which we postulate to be the ultimate cause of blue eye color.

Great! One problem: the two studies point to two different SNPs on two introns, 12 & 86, on HERC2. How to solve this problem? On the one hand the group that settled on intron 86 has been working on this issue for a while, and, they seem to have a plausible mechanism which could dovetail with their statistical analysis. But the Dutch group which focused on intron 12 did a genome-wide association with two groups; and their geographical result was impressive. My inclination is to go with the former group because of their long study of this topic as well as their claim that they've plumped the depths of every SNP in the region, and the fact that they have a pretty good functional model for what's going on. But there's a nice little tie-breaker, another paper which reaches the same general conclusions as the first group which favored intron 86 using a Danish sample. KAYSER, M. (2008). Three Genome-wide Association Studies and a Linkage Analysis Identify HERC2 as a Human Iris Color Gene. The American Journal of Human Genetics DOI: 10.1016/j.ajhg.2007.10.003