Two gene families point to the origin of the mollusk's smarts. 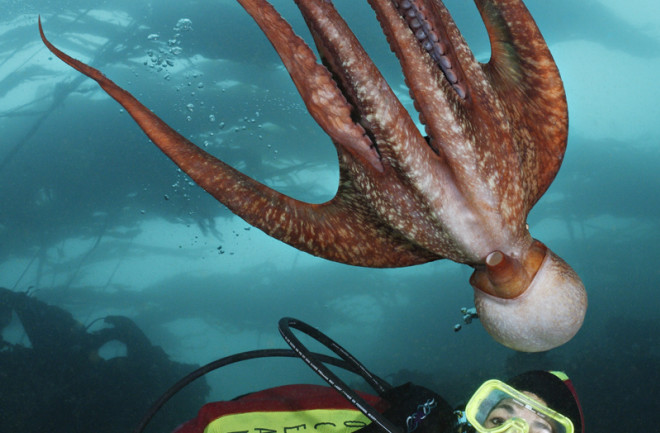 Octopuses hail from a humble neighborhood in the taxonomic tree: the mollusks, which include snails, clams and other dimwitted animals. Yet octopuses are clever critters, known to use tools in the wild, play in captivity and even watch what’s happening outside their aquarium.

Scientists have long wondered how they evolved such smarts independently of mammals and birds. The sequencing of the octopus genome, published in August, offers a surprising answer.

The genome shows that octopuses have the same small repertoire of neurotransmission genes as lower mollusks. This limited set of nervous-system building blocks should have restricted their ability to develop advanced intelligence, says Daniel Rokhsar, an evolutionary biologist at the Okinawa Institute of Science and Technology Graduate University in Japan.

But Rokhsar and his collaborators found two vastly expanded gene families in octopuses: protocadherins, which steer neurons to connect into complex circuits during development, and C2H2 zinc finger transcription factors, which turn other genes on and off with exquisite precision. This could have enabled the genome to be expressed “in a more complicated way than in a clam or a snail,” says Rokhsar. These two gene families likely allowed the octopus to build unique neural circuits serving functions such as memory, navigation and planning.