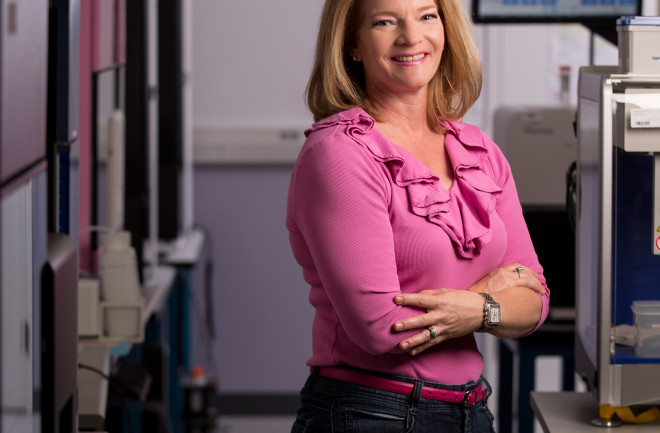 Elaine Mardis lives for dream machines, from her glossy red Audi S5 to the roomful of shiny new DNA sequencers housed at the Genome Institute at Washington University in St. Louis. As co-director of the institute and director of technology development, Mardis leads teams that are using genome science to transform the diagnosis and treatment of cancer.

A self-professed tech geek, Mardis has been a pioneer of the technological breakthroughs that made it possible to decrypt the 3 billion-plus A’s and T’s, G’s and C’s that make up the human genome.

Since the 1990s, her team has often been the first to test-drive new sequencing machines. They sequenced the first whole animal, the flatworm, in 1998, and then pushed the systems to handle big chunks of bigger genomes — billions of base pairs.

The result: A decade ago, reading off one single human genome was a billion-dollar effort. Today, the price tag is around $8,000 and falling fast; it will soon be feasible to sequence each person’s complete DNA as part of routine medicine.

The implications for cancer are promising. In 2008, Mardis’ group was the first to sequence a whole human cancer genome. Mutations transform the genome of a tumor; its cells become genetic outlaws that spread, ignore normal stop-and-go signals and evade cancer-killing drugs or radiation.

In the past, the mainstay of cancer therapy was broad-spectrum chemotherapies that attack all rapidly dividing cells. More recently, drug developers have learned to target individual gene changes, like using the drug Herceptin to specifically go after HER2 mutations in breast cancer.

The coming era of genome-based cancer treatment will vastly expand these opportunities; already, genome sequencing is identifying additional mutations unique to certain cancers. In Mardis’ vision of the future, doctors will sequence each patient’s tumor to zero in on its unique vulnerabilities and shut down its malfunctioning genes.

Discover: How is DNA sequencing changing how we treat cancer?

Elaine Mardis: In 2013 there were numerous studies [that provide] growing evidence that linking a patient’s tumor genotype to a drug or drugs can achieve at least temporary remission. It’s an exciting time for doctors, patients and genomics folks like me.

Soon, we’re going to see an era where patients are monitored much more closely, their diagnosis is much more precise and individualized and, hopefully, their outcomes are much better. Side effects will be diminished. The days of one-size-fits-all therapeutics will be gone.

In a preview of this future, your team recently saved a colleague’s life by using genome data to put his blood cancer into remission. How did you do that?

EM: Lukas [Wartman, a doctor at Washington University] was dying of a second relapse of acute lymphoblastic leukemia. He needed a stem cell transplant, which is a normal treatment for leukemia, but his cancer needed to be in remission first, and the chemotherapy wasn’t working.

We sequenced his leukemia cells and found his tumor’s Achilles’ heel: high expression of the FLT3 gene that was known to respond to a drug, called Sutent, not normally used for leukemia. With this drug, we got him into remission, and then he could get a stem cell transplant.

Technically we cannot say that we saved his life, because patients with leukemia can relapse at any time. But Lukas is still in remission and back at work.

How can decoding mutations help you fight tumors?

EM: Lung cancer is a great example. In 2004, we started looking at tyrosine kinase inhibitors, drugs that block an enzyme that fuels cell growth. Some patients responded to the therapy and some didn’t, and we had no idea what the difference was. So we sequenced a gene involved in cell growth and found a correlation in about 85 percent of the patients: If you had a certain mutation in the EGFR gene, you responded to the drug; if you didn’t have the mutation, you didn’t. This mutation is more common in Asians, in people who never smoked and in women.

Flash forward to 2012. Now, if you are diagnosed with lung cancer and you were [in one of these groups], you will get tested for that mutation. If you have it, you’ll get the therapy right away. Responses are dramatic — you often have complete tumor shrinkage in a matter of weeks.

What about tracking cancer remissions and relapses?

EM: Imaging such as MRIs or CT scans, which reveal the mass and volume of the tumor, can fool you sometimes: The patient gets a scan, goes on a therapy, and when they return in a month for a second imaging, the structure and size of the tumor haven’t changed. But that doesn’t mean the patient isn’t responding — cancer cells are dying, but the size hasn’t changed.

To avoid this confusion, we want to develop a “liquid biopsy” that can evaluate blood samples for tumor cells or tumor DNA. We can thus monitor response to treatment. If tumor cells are found in this blood sample, that would mean the patient is not responding to the cancer treatment. Then we can look for different treatment options, guided either by a mutation unique to that person’s cancer or perhaps unique to that subtype of tumor. We could also scan for mutations that put patients at risk for relapse and monitor them more closely.

In a recent endometrial cancer study you led, whole genome sequencing turned up mutations that had never been seen in that disease. What was the upshot of this project?

EM: That was an incredibly satisfying project to be a part of. We identified patients with mutations that predict phenomenal outcomes in the disease; this is a group of women with endometrial cancer who won’t need the financial, physical or emotional toll of chemotherapy at all — they’re patients who are probably cured by surgery alone.

You don’t want to be giving anyone chemotherapy if you don’t have to. Of course, this would need to be studied in a clinical trial before it became the standard of care. But it was a very hopeful message.

[This article originally appeared in print as "On the Genome Frontier with Elaine Mardis."]