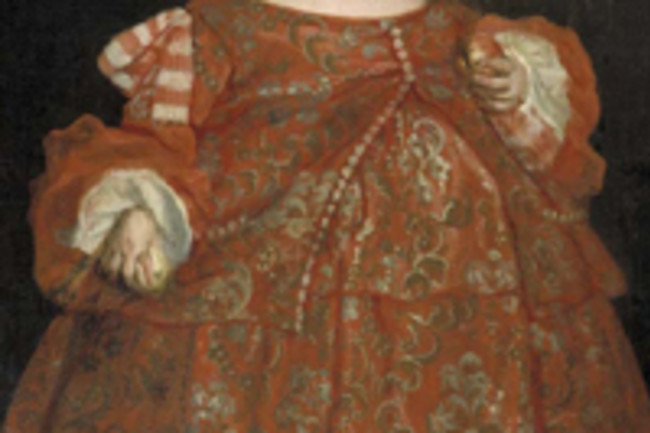 As I have said before biology is quite often the science of exceptions, of variation. Evolutionary biologists spend a great deal of time wondering about the origin of sex, but across vast swaths of the tree of life sex is simply not a consideration. W. D. Hamilton made his name with models of inclusive fitness, but complex social structures are constrained and fully elaborated to only a few branches of the tree of life. Like economics then what interests us in biology often has normative priors; we are a homocentric species. On a fundamental level we understand that we do not exist at the apex of a great chain of being, but most of us can not help but wonder as to the human relevance of a particular biological phenomenon. I believe genomic imprinting is one of those biological phenomena that has an interest for humans because of its theoretical peculiarities and pragmatic relevance. Diseases such as Praer-Willi syndrome are the byproducts of the peculiar nature of genomic imprinting, or at least the malfunctioning of the phenomenon. Simultaneously the dynamic which gives rise to these diseases in our species confounds general Mendelian expectations. In the case of imprinted genes the specific parental origin of the allele has direct bearing on the phenotypic outcome. It may be that the copy of the gene inherited from the father expresses while that from the mother is silent, or, it may be the inverse. Why and how genomic imprinting is a question of evolutionary and molecular genetics. A new paper in PLoS Biology, Evolution of Genomic Imprinting with Biparental Care: Implications for Prader-Willi and Angelman Syndromes, extends David Haig's kinship theory of genomic imprinting which I've reviewed before. The paper is very homocentric, as evidenced by the author summary:

Genomic imprinting refers to genes that are silent when maternally inherited but expressed when paternally inherited, or vice versa. Hailed as the most successful evolutionary explanation for genomic imprinting, the kinship theory contends that the paternally inherited copy of a gene, which determines the allocation of maternal resources to her offspring, is selected to extract more resources than its maternally inherited counterpart. The conflict between genes of different parental origin leads to the silencing of one copy but the expression of the other. As originally formulated, the kinship theory assumes that mothers contribute all resources to the raising of offspring. Yet this is not entirely true, as biparental care is common in some mammals, particularly humans. By positing that fathers contribute some resources and analyzing the effect on the kinship theory, I derived new conditions for the evolution of genomic imprinting and discovered that biparental care does not necessarily increase the opportunities for intragenomic conflict. Interestingly, biparental care allows for the evolution of patterns of expression opposite to the ones originally predicted in the kinship theory. Insight gained from my model explains the clinical phenotype of Prader-Willi syndrome, which has so far been a challenge to the kinship theory. Children suffering from this syndrome exhibit a striking biphasic phenotype characterized by poor sucking and reduced weight before weaning but voracious appetite and obesity afterwards. I argue that, in humans, the paternal contribution increases after weaning. This would explain the evolution of genes with the opposite imprinting pattern before and after weaning, and thus sheds light on the bi-phasic phenotype of Prader-Willi syndrome.

The core of the paper is a mathematical model. Specifically, the author attempts to extend the algebra by adding a layer of complexity which takes into account paternal investment to a far greater degree than other models. Why would other models of kinship theory focus on maternal investment? It's rather common sense: in most mammalian species mothers are the primary caregivers to the point of exclusion. I've reedited Figure 1 of the paper to illustrate what proportion of genera in each order exhibit biparental care. The gray represents the default mammalian state where one can assume that females are primary resource inputs which affect the fitness of the offspring (i.e., do they survive to reproduce or not?). Most mammalian orders are not characterized by much male investment, so the matrifocal assumptions of conventional kinship theory are generally appropriate. But, if you are interested in carnivores or primates you need to refine the model to take into account large deviations from your expectation. And, if you considering H. sapiens male investment may be quite key in terms of understanding the evolutionary history of the species and how it might affect proximate genetic phenomena. In this paper the author makes the case that the parameter of paternal investment must be taken into account to explain the developmental arc of a disease such as Prader-Willi syndrome. Children who suffer from Prader-Willi syndrome have a tendency of being relatively listless feeders before weaning, but voracious consumers after that point. The latter invariably leads to morbid obesity and concomitant health problems. Biophysically the problem is that the paternal copy of a gene which controls feeding behavior is not present in these children due to a chromosomal deletion, and the maternal copy can not compensate because it is normally silent. In other words, the oppositional dynamic of genomic imprinting in this case results in a situation where a functional allele can not "mask" the null copy because the maternal allele is obligately silent. Why the silence? The fact that the child initially does not feed vigorously suggests that the maternal copy's interest is to minimize resource extraction on the part of the proximate offspring so as to increase the fitness of future offspring by not overtaxing the resources of the mother. This is the "interests of the gene" because the maternal copy will be present in future offspring. On the other hand, the paternal allele has a lower probability of presence in future offspring because the mother may have different mates. So its interest is at cross-purposes insofar as it increases its fitness by extracting as many resources as possible at that moment because future offspring may not carry the same allele. Obviously lifetime monogamy dampens this dynamic. If the father has an expectation that all his offspring will have the same mother then the paternal copies will have the same interest as the maternal copies. The father invests in the offspring as does the mother, and any decrease in vitality or vigor on the part of the mother must be compensated by increased effort on the part of the father to maintain the basal level of aggregate investment necessary for survival and potential reproduction of the offspring. In other words: lifetime obligate monogamy will suppress genomic imprinting according to the kinship theory, while polygamy and minimal pairbonds are excellent evolutionary contexts for the emergence of genomic imprinting. The presence of genomic imprinting in a species then can give us insight into its past history, as well as offer up questions in terms of the particular nature of genetic molecular machinery. But, we should be cautious about oversimplifying and extrapolating from the kinship theory of genomic imprinting alone, there are other models which may also serve as important causal factors. And these dynamics work over evolutionary time which is characterized by fluxes, frequency dependence and stochasticity. The very fact that the kinship theory needs to be extended, refined and complexified for humans tells us that specific cases may exhibit their own peculiarities. The guts of the mathematical model can be found in the Methods of the paper. It isn't taxing in terms of the basic math you need, but the notation can be a bit daunting. Nevertheless, I think it is an intelligible extension of the sort of formalism that David Haig used to elaborate the maternal-centric kinship theories. Since time is the interesting angle: Wm = ∫0^T [ B0 - 1/2 (Cm + κMCP ) ] dt Wp = ∫0^T [ B0 - 1/2 ( κPCM + CP ) ] dt In words, these two equations are describing the inclusive fitness the maternal and paternal alleles as a function of time in terms of the lifespan of the offspring. B0 is the benefit to the offspring, which is subtracted from the costs imposed upon the parents. The C's are costs to each parent, but the κ are a bit more subtle. They represent the cost to the subscripted parent proportional to the cost of the other parent. In a purely monogamous social circumstance the κ = 1, because the parents pool their investments together and a setback for either parent has immediate effect on the other. In contrast, if κ = 0 the there is no real pooling and the situation arises where the costs to each parent must be evaluated purely from a gene-centric perspective since the mother and father have interests to act very rationally. In particular, if a father is simply a sperm donor obviously his own allele would like to extract as much resources from the mother as possible because it is unlikely that they will mate once more, so all future offspring will lack that allele. Reality is a bit more complex than perfect monogamy or all-against-all polygamy. Figure 4 from the paper: 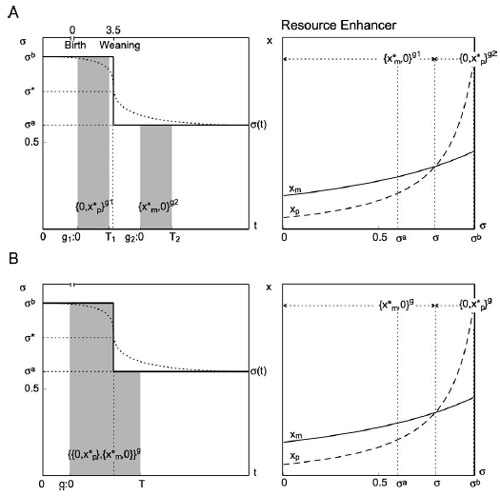 If you read the Methods section the notation will be familiar, but A & B basically outline two genetic architectures. A illustrates a dual gene model where their expressions are out of sync producing the peculiarities of the Prader-Willi behavioral phenotype, while B shows a single gene model. The subscripts "p" and "m" are straightforward. σ is resource allocation on the part of the mother, while "x" represents the expression level of the allele which results in greater resource allocation on the part of the parents. As you can, over time (the x-axis on the left charts) the mother's proportion of resource allocation decreases and the father's increases. This is due to standard physiological constraints in mammals; males do not lactate or gestate! The second portion of each figure shows that as you increase the mother's resource allocation the paternal alleles increase in their expression, as they attempt to take advantage of "free" resources. Recall that when a cost to one parent rebounds to the other genomic imprinting is not favored because this sort of "selfish" dynamic could never arise. The single gene and dual gene models are presented by the author because here he argues that this should be a blueprint for further molecular genetic research. Presumably this would be NIH funded and aimed toward some sort of cure or palliation of Prader-Willi syndrome. Not only do Prader-Willi syndrome suffers exhibit morbid obesity, but they are quite often somewhat mentally retarded, so this is an ailment with global physiological consequences. Though it seems that a "cure" for this sort of serious chromosomal disease is very far into the future, this paper shows how evolutionary genetic logic allows us to predict, project and model the potential specificities of molecular genetic architectures. Citation: Úbeda F (2008) Evolution of Genomic Imprinting with Biparental Care: Implications for Prader-Willi and Angelman Syndromes. PLoS Biol 6(8): e208 doi:10.1371/journal.pbio.0060208