Genetics is One: Mendelism and quantitative traits 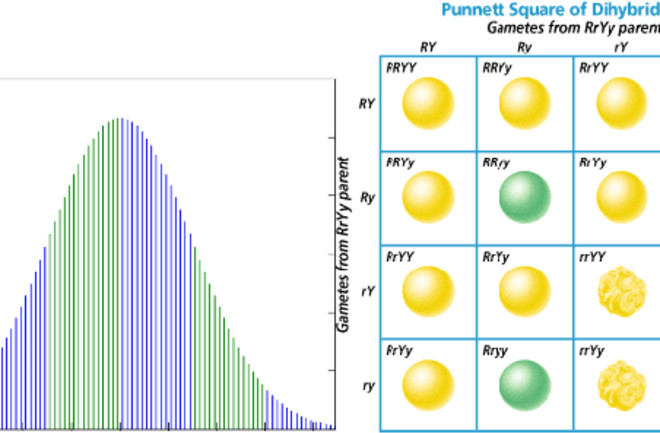 In the early 20th century there was a rather strange (in hindsight) debate between two groups of biological scientists attempting to understand the basis of inheritance and its relationship to evolutionary processes. The two factions were the biometricians and Mendelians. As indicated by their appellation the Mendelians were partisans of the model of inheritance formulated by Gregor Mendel. Like Mendel many of these individuals were experimentalists, with a rough & ready qualitative understanding of biological processes. William Bateson was arguably the model's most vociferous promoter. Set against the Mendelians were more mathematically minded thinkers who viewed themselves as the true inheritors of the mantle of Charles Darwin. Though the grand old patron of the biometricians was Francis Galton, the greatest expositor of the school was Karl Pearson.* Pearson, along with the zoologist W. F. R. Weldon, defended Charles Darwin's conception of evolution by natural selection during the darkest days of what Peter J. Bowler terms "The Eclipse of Darwinism".** One aspect of Darwin's theory as laid out in The Origin of Species was gradual change through the operation of natural selection upon extant genetic variation. There was a major problem with the model which Darwin proposed: he could offer no plausible engine in regards to mode of inheritance. Like many of his peers Charles Darwin implicitly assumed a blending model of inheritance, so that the offspring would be an analog constructed about the mean of the parental values. But as any old school boy knows the act of blending diminishes variation! This, along with other concerns, resulted in a general tendency in the late 19th century to accept the brilliance of the idea of evolution as descent with modification, but dismiss the motive engine which Charles Darwin proposed, gradual adaptation via natural selection upon heritable variation. Mendels theory of inheritance rescued Darwinism from the problem of gradual diminution of natural selection's raw material through the process of sexual reproduction. Yet due to personal and professional rivalries many did not see in Mendelism the salvation of evolutionary theory. Pearson and the biometricians scoffed at Bateson and company's innumeracy. They also argued that the qualitative distinctions in trait value generated by Mendel's model could not account for the wide range of continuous traits which were the bread & butter of biometrics, and therefore natural selection itself. Some of the Mendelians also engaged in their own flights of fancy, seeing in large effect mutations which they were generating in the laboratory an opening for the possibility of saltation, and rendering Darwinian gradualism absolutely moot. There were great passions on both sides. The details are impeccably recounted in Will Provine's The Origins of Theoretical Population Genetics. Early on in the great debates the statistician G. U. Yule showed how Mendelism could be reconciled with biometrics. But his arguments seem to have fallen on deaf ears. Over time the controversy abated as biometricians gave way to the Mendelians through a process of attrition. Weldon's death in 1906 was arguably the clearest turning point, but it took a young mathematician to finish the game and fuse Mendelism and biometrics together and lay the seeds for a hybrid theoretical evolutionary genetics.

That young mathematician was R. A. Fisher. Fisher's magnum opus is The Genetical Theory of Natural Setlection, and his debates with the American physiologist and geneticist Sewall Wright laid the groundwork for much of evolutionary biology in the 20th century. Along with J. B. S. Haldane they formed the three-legged population genetic stool upon which the Modern Neo-Darwinian Synthesis would come to rest. Not only was R. A. Fisher a giant within the field of evolutionary biology, but he was also one of the founders of modern statistics. But those accomplishments were of the future, first he had to reconcile Mendelism with the evolutionary biology which came down from Charles Darwin. He did so with such finality that the last embers of the debate were finally doused, and the proponents of Mendelism no longer needed to be doubters of Darwin, and the devotees of Darwin no longer needed to see in the new genetics a threat to their own theory. One of the major issues at work in the earlier controversies was one of methodological and cognitive incomprehension. William Bateson was a well known mathematical incompetent, and he could not follow the arguments of the biometricians because of their quantitative character. But no matter, he viewed it all as sophistry meant to obscure, not illuminate, and his knowledge of concrete variation in form and the patterns of inheritance suggested that Mendelism was correct. The coterie around Karl Pearson may have slowly been withering, but the powerful tools which the biometricians had pioneered were just waiting to be integrated into a Mendelian framework by the right person. By 1911 R. A. Fisher believed he had done so, though he did not write the paper until 1916, and it was published only in 1918. Titled The Correlation Between Relatives on the Supposition of Mendelian Inheritance, it was dense, and often cryptic in the details. But the title itself is a pointer as to its aim, correlation being a statistical concept pioneered by Francis Galton, and the supposition of Mendelian inheritance being the model he wished to reconcile with classical Darwinism in the biometric tradition. And in this project Fisher had a backer with an unimpeachable pedigree: a son of Charles Darwin himself, Leonard Darwin. You can find this seminal paper online, at the R. A. Fisher digital archive. Here is the penultimate paragraph:

In general, the hypothesis of cumulative Mendelian factors seems to fit the facts very accurately. The only marked discrepancy from existing published work lies in the correlation for first cousins. Snow, owning apparently to an error, would make this as high as an avuncular correlation; in our opinion it should differ by little from that of the great-grandparent. The values found by Miss Elderton are certainly extremely high, but until we have a record of complete cousinships measured accurately and without selection, it will not be possible to obtain satisfactory numerical evidence on this question. As with cousins, so we may hope that more extensive measurements will gradually lead to values for the other relationship correlations with smaller standard errors. Especially would more accurate determinations of the fraternal correlation make our conclusions more exact.

Fisher, R. A. (1918). On the correlation between relatives on the supposition of Mendelian inheritance Transactions of the Royal Society of Edinburgh

Suggested Reading:The Origins of Theoretical Population Genetics, R.A. Fisher: The Life of a Scientist, and The Genetical Theory of Natural Selection. * Though I will spare you the details, it may be that the Galtonians were by and large more Galtonian than Galton himself! It seems that Francis Galton was partial was William Bateson's Mendelian model. ** To be fair, I believe the phrase was originally coined by Julian Huxely. *** Just use standard deviation units. Image Credit: Wikimedia