Whenever Zack Ajmal posts a new update to the Harappa Ancestry Project he appends some data to his ethnic database. This sends me to Wikipedia, because how many people are supposed to know what a "Muslim Rawther" means? Well, if you are a Muslim Rawther, and perhaps from Southern India, you would. But South Asian ethno-linguistic categories and hierarchies are notoriously Byzantine, and I have difficulty making sense of them. This isn't too surprising in my case, as my family's background is relatively mixed in the very recent past (e.g., Hindus and Muslims, and people of various caste backgrounds), so we're not the sort who can go at length about our pure ancestry and all that stuff. Unfortunately, Wikipedia isn't always useful, because the people editing the entries on particular South Asian ethnic groups are often people from those ethnic groups, so you get a lot of extraneous information, and a particular slant on how awesome and high achieving the group (also, sometimes there's funny stuff about how notoriously good looking that particular caste!). On occasion there are other sources which are informative. For example, Zack has several individuals from the Tamil Nadar caste. I know a little about this group because 1) I have a friend whose family is Nadar (he's American, so saying he's an American Nadar is pretty worthless), 2) The New York Times profiled the group last fall. When Zack noted that a group termed Tamil Vishwakarma had submitted entries, I went to Wikipedia. That was the first time I'd heard of the group. This is what I found:

Viśvákarma is the term used in India for a caste of priests, engineers, architects, sculptors, temple builders and artists. The term is applied to five sub-castes; blacksmiths, carpenters, coppersmiths, goldsmiths and sculptors.They connect themselves as Pancha janas of vedic period [Rathakara, Karmakara, Thakshaka, Kumbhakara,and NishadaSthapathies] and worshiping various forms of Viswakarma, i.e., Twostar, Daksha prajapathy, Takshaka and Maya and Rhibhus etc. Vishwakarma Brahmins are also called Rathakara Brahmins, and the Rathakara mentioned in the Rigveda (1.6.32) indicates high status and is associated with the placing of the holy sacrificial fire in the Yajna kunda...According to the Srautasutras, the Rathakara (Chariot-maker) is entitled to perform all the sacrifices....In many sacrifices, like the Rajasuya, the Rathakara played a role as recipient of the offerings (ratninaḥ)....

First, I don't know what a lot of this means. For example, "many sacrifices, like the Rajasuya...." makes no impression on me, as I don't know what Rajasuya is supposed to be. But the salient point here is that the Vishwakarma are making some assertion to a relationship with Brahmins. This, I can understand. Many non-Brahmin groups in South Asia want to associate with Brahmins, because Brahmins are high status and socially superior. I assume most of the time this is made up, how many fallen Brahmins can there be exactly? It's kind of like claiming descent from Muhammad among Muslims, or being descended from a particular lecherous and promiscuous king among the poor of Europe. But after months of the Harappa Ancestry Project you can shift your assessment of the probabilities based on the genetics alone. South Indian Brahmins are genetically distinctive consistently from other non-Brahmin South Indians. So how would I go about exploring the veracity of the Vishwakarma's claims? First, I am looking at K = 4. So the data set has four ancestral populations: South Asians, Europeans, East Asians, and Africans.

These are hypothetical abstractions, so focus on the relative relationships across individuals and groups, not on the absolute quanta.

I took Zack's ADMIXTURE results, ethnic labels, and added a few categories myself. You can see the CSV here. Basically I took the ones with caste identification and partitioned them into Brahmin vs. non-Brahmin. Note that the non-Brahmin categories includes groups of all caste ranks. It's socially heterogeneous. I also added a geographical label. NW = Pakistan, and the northwestern third of India. NE = Bangladesh and the northeastern third of India (Bihar is in the northeast here). S is south, for the four Dravidian dominated states. And C, central, includes Mahrashtra, Gujarat, etc. First, let's look at all the Brahmins and the two Vishwakarma. I sorted by South Asian ancestry. 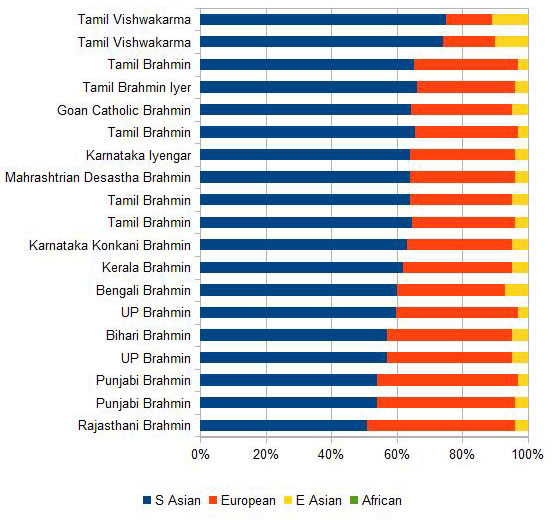 The Vishwakarma are outliers among the Brahmins. You can see a discontinuity. Sorting by South Asian, European, and then East Asian ancestry, here are the Vishwakarma's neighbors: 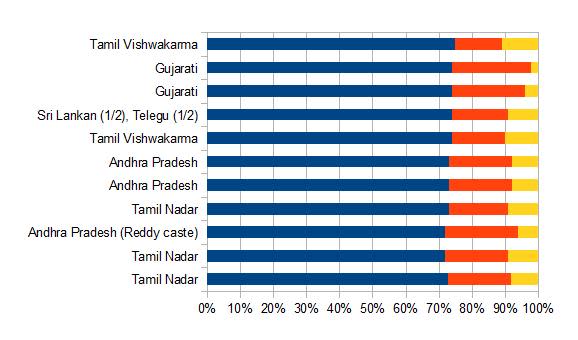 They're like other non-Brahmin South Indians. No discontinuity. I can't attest to the spiritual Brahmanitude of the Vishwakarma, but I'd say that they're probably asserting Brahmin associations to elevate their status vis-a-vis other castes. Now let's look at the all the Harappa samples. I will sort first by region, and then by South Asian ancestry. 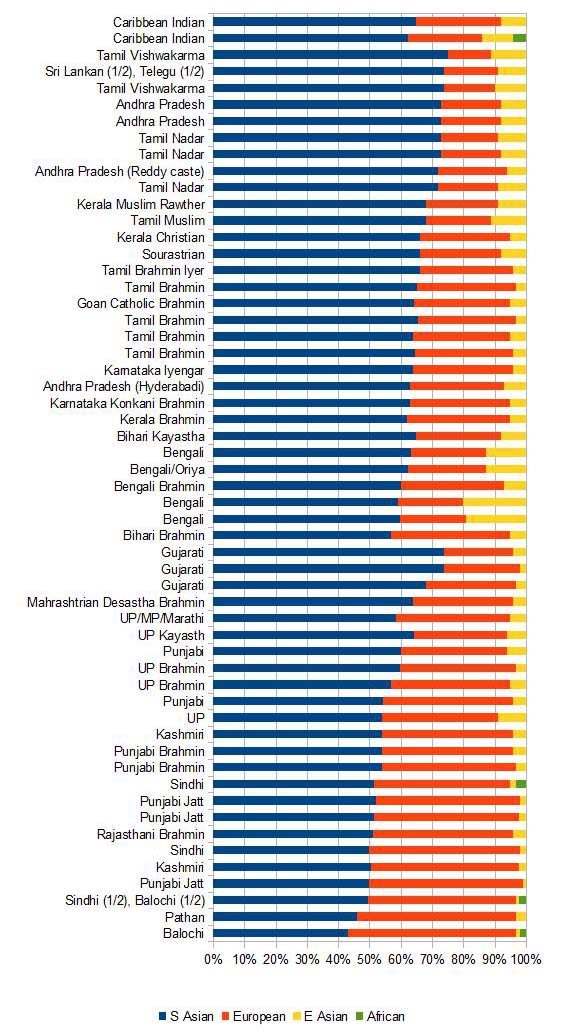 A few notes. Jatts are originally the freehold peasant cultivators of Punjab I think. They think they're pretty awesome! Sourastrians are transplants from Gujarat to Tamil Nadu in the South. They've maintained their Indo-Aryan dialect. The two Bengalis with a lot of East Asian ancestry are my parents. There is a pretty fit here to a two parameter model of predicting South Asian ancestral quanta: geography & caste. Where this breaks down the most seems to be in the far northwest, where the Brahmins don't seem to be that much less South Asian than non-Brahmins, and in fact, perhaps more South Asian than the peasant Jatts. Finally, the origins of Caribbean Indians is generally presumed to be among the peasants of the northeastern half of the Indo-Gangetic plain, going by the historical sources and the persistence of Bhojpuri in Trinidad and Guyana. This looks about right.