Pigmentation is a complex physical trait with multiple genes involved. Several genes have already been associated with natural differences in human pigmentation. The SLC45A2 gene encoding a transporter protein involved in melanin synthesis is considered to be one of the most important genes affecting human pigmentation. Here we present results of an association study conducted on a population of European origin, where the relationship between two non-synonymous polymorphisms in the SLC45A2 gene -- rs26722 (E272K) and rs16891982 (L374F) -- and different pigmentation traits was examined. The study revealed a significant association between both variable sites and normal variation in hair colour. Only L374F remained significantly associated with hair colour when both SNPs were included in a logistic regression model. No association with other pigmentation traits was detected in this population sample. Our results indicate that the rare allele L374 significantly increases the possibility of having black hair colour (OR = 7.05) and thus may be considered as a future marker for black hair colour prediction.

Other SNPs at this locus have been associated with skin color variation. But this is looking at a Polish population. Other studies looked at a more diverse array of populations. Also, I know some people will attribute the existence of darker-skinned Poles to the influx of Tatars from the east. First, I'm generally skeptical of this argument because it doesn't seem like they were numerically very significant. After all, it is difficult (though not impossible) to detect the historically much more significant Magyar and Turkic settlement within the boundaries of modern Hungary via genetic techniques. Most of the inhabitants of Hungary seem to be not too dissimilar genetically from their neighbors. Secondly, this locus seems to have been subject to a selective sweep relatively recently: 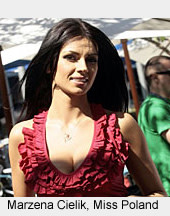 The maximum-likelihood estimate of tis 10,965 years. Ninety-five percent confidence intervals for this age can be...This produces the values...1,328 and...39,609 years.

In other words, the ancestral variant of SLC45A2 in the Polish population may be indigenous to the Polish population, and not due to exogenous genetic inputs within the last few thousand years. Unlike at SLC24A5 Europeans are not totally fixed for the derived variant. A closer look at the pattern of variation around this locus on individuals who carry the ancestral allele of SLC45A2 in Poles could probably answer this narrow question.* Below the fold is a Google Map from ALFRED which plots the frequencies of the two alleles in the SNP implicated in black hair prediction in this study: 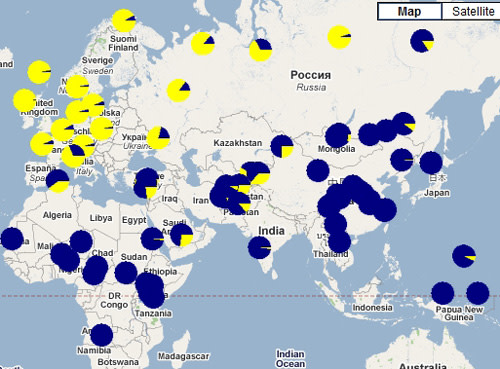 Related:Other posts mentioning this locus.... Postscript: Poland has 15-50,000 Roma ("Gypsies"). This is probably an underestimate, and there is a fair amount of admixture between Roma and their host populations. Because the host are much more numerous the impact on the Roma is more significant, but it seems more likely that if Marzena Cielik's appearance is due to recent exogenous genetic input it is Roma rather than Tatar (H/T to the spammer/troll "Levi Johnston," who put it a bit more crudely). * Also, as in much of eastern Europe immigrant Turks were a warrior caste who were generally assimilated into the nobility. So if there are differences in complexion by class origin, that might be indicative of a large genetic input.