No great surprises, and recapitulating what you saw with Europeans earlier. Below the fold is one of the figures reedited for clarity. 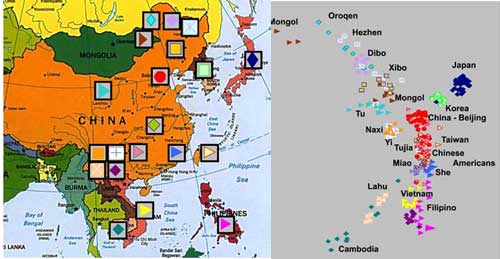 The chart illustrates the first two principal components of genetic variation. Note that in the paper they emphasize that there's information in a lot of the subsequent components which is informative for smoking out population substructure. Related:Genetic map of Europe; genes vary as a function of distance, More genetic maps of Europe, More genetic maps of Europe, Population substructure in Japan and Finns as European outliers.