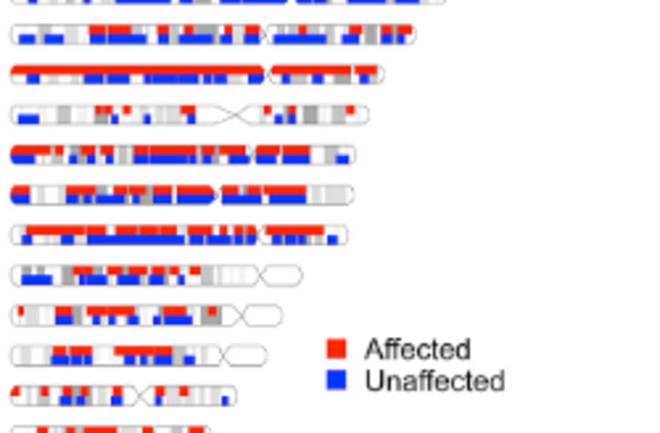 Illustration of runs of homozygosity for affected and unaffected siblingsCredit: Intellectual Disability Is Associated with Increased Runs of Homozygosity in Simplex Autism It is generally understood that inbreeding has some negative biological consequences for complex animals. Recessive diseases are the most straightforward. The rarer a recessive disease is the higher and higher fraction of sufferers of that disease will be products of pairings between relatives (the reason for this is straightforward, as extremely rare alleles which express in a deleterious fashion in homozygotes will be unlikely to come together in unrelated individuals). But when it comes to traits associated with inbred individuals recessive diseases are not what comes to mind for most, the boy from the film

is usually the more gripping image (contrary to what some of the actors claimed the young boy did not have any condition). Some are curious about the consequences of inbreeding for a trait such as intelligence. The scientific literature here is somewhat muddled. But it seems likely that all things equal if two people of average intelligence pair up and are first cousins the I.Q. of their offspring will be expected to be 0-5 points lower than would otherwise be the case. By this, I mean that the studies you can find in the literature suggest when correcting for other variables that the inbreeding depression on the phenotypic level is greater than 0 (there is an effect) but less than 5 (it is not that large, less than 1/3 of a standard deviation of the trait value). Presumably for higher levels of inbreeding the consequences are going to be more dire. But what about genetic homogeneity that's not due to inbreeding? Recall that the recent Ralph and Coop paper showed empirically that there were many networks of genetic relatedness between people who one might think are absolutely unrelated. Anyone who uses 23andMe has plenty of evidence of this, as "relatives" begin to pop up who match genetic segments with you. If you have one line of descent from an individual far in the past you are often going to have another. This means that segments of DNA from the same individual may come "back together" and form a homozygous block. How this occurs for inbred individuals is simple. If your parents are first cousins they share one pair of grandparents, and each of these grandparents has two short lines of descent down to you. But this same dynamic applies in diluted form to those who are much further back in your genealogy. You may be entirely outbred in a pedigree sense, but still have runs of homozygosity due to chance. A new paper in AJHG compares levels of runs of homozygosity in a data set of unaffected parents, unaffected offspring, and affected offspring. In particular the authors had a data set in the thousands of families who participated in autism research. The affected siblings were diagnosed with autism, while the parents and unaffected siblings did not exhibit the condition. In addition to autism there was a range in intelligence of the affected siblings. This experimental design is useful because you are comparing siblings who share a great deal genetically, but are phenotypically different. You have to correct for fewer confounds because their genetic backgrounds overlap, and, their environments are highly correlated. Of course siblings are similar genetically, they are not duplicates. The expected relationship of siblings is 50%, but there is a variation in this value, and obviously there are genetic differences with the unrelated balance. In this study the authors focused on runs of homozygosity (ROH), which are likely due to ancestors showing up across their lineage at some distant time in multiple instances. Their minimum threshold for serious ROH blocks were relatively short at 2,500 kb (the expected value for how far back the common ancestor responsible for the ROH block of 2,500 is ~1,000 years). The topline find is that very low I.Q. affected siblings (<70, what would be termed "mentally retarded" in the past) had 1.32 times more ROH of > 2,500 kb (p = 0.03). They did not find a statistically significant different >70. The authors did a range of manipulations and slicing and dicing of the data. I am not particularly interested in those hoary details. Rather, I'm heartened that high density SNP chips are now being applied to these sorts of massive family based studies, and the biological differences between siblings can be more properly assessed. There is a great deal of randomness across siblings in terms of their genetic inheritance. Two of my siblings only share 41% of their genes identical by descent (as opposed to the expected 50%). Not only that, I know that frequency of ROH also varies randomly across siblings; they do across mine. If the number of de novo point mutations of significant effect is on the order of 30 or so per individual then again variation across sibling cohorts is liable to be significant and of note. Issues such as inbreeding depression or the phenotypic consequences of homozygosity were until recently theoretical matters, or explored in organisms such as Drosophila. That age is coming to an end. High coverage whole genome sequencing is going to allow for precise and powerful comparisons across sibling cohorts, and as whole nations go "all in" the swell of data is going to be awesome. I suppose people will find out things that they may be uncomfortable with, but one ultimately has to face up to the truth in the end. Addendum: On a converse note, here's a case where you seem to see outbreeding depression. On the genome-wide scale I'd be willing to bet this is less of a problem than inbreeding. And no, I am not convinced by the fact that there seems to be higher fertility in more closely related individuals in Iceland.