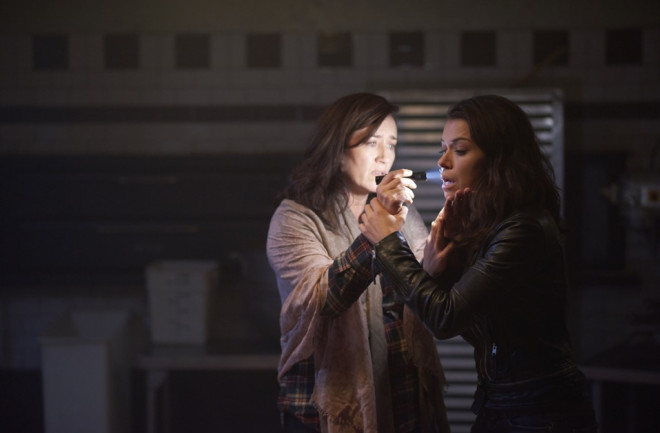 (Credit: Ken Woroner © BBC AMERICA) Gene therapy is all the rage among researchers in several fields of medicine, and the BBC America sci-fi TV hit Orphan Black has made sure to get its own piece of the action. As with reproductive cloning and other biotech issues hashed out over the last four years, characters in the “The Black” are making references to gene therapy with a twist that’s far-fetched, but grounded in state-of-the-art science and real-life emerging possibilities. With the season 4 finale set to air tonight, Orphan Black fans know what’s going on with those little maggot-shaped bioelectronic cheek implants. At least for some characters, the implants are gene therapy delivery devices. The idea of an implant for gene therapy delivery is a problem scientists in the real world are working to solve, and while there’s no medical reason for using the cheek as the site of implantation, there is a location nearby the cheek where the first real-life gene therapy implants are likely to go: the ear. Deploying Carrier Vectors Most basic and clinical research in gene therapy uses DNA that is packaged inside carrier particles known as vectors. A vector can be a virus, a liposome (a spherical container similar to the HDL and LDL carriers that transport your “good” and “bad” cholesterol, respectively, in blood), or a variety of structures made of different chemical polymers. Vectors have tradeoffs that differ depending on the genetic payload and the type of cells targeted. For instance, a type of viral vector called a retrovirus is good for modifying dividing cells, but not useful for diseases where non-dividing cells need to be changed.

(Credit: Wikimedia Commons) With gene therapy today, the most commonly used vector is called the adeno-associated virus (AAV). There are various subtypes of AAV, and each subtype determines which body tissues and organs will receive the treatment. Compared with other viruses, AAV tends not to stimulate the immune system easily, particularly if the treatment is administered just once. One more advantage of AAV is that it delivers its genetic payload into target cells as an episome – a piece of DNA that utilizes the cell’s machinery to make the needed gene product, but does not insert itself into a chromosome. This minimizes the risk of disrupting other genes, which could kill the cell or transform it into a cancer cell. The Downside AAV can only carry a small genetic payload, however. By injecting AAV carrying the AADC gene, a relatively small package, into a part of the brain called the putamen, neurosurgeons can restore long-term functions in Parkinson patients. It’s working, because the AADC gene just barely fits inside the AAV. Things are different with the much larger gene that’s broken in people with Duchenne muscular dystrophy (DMD). In the latter case, advances are on the horizon because of a technology called CRISPR-Cas9, a gene editing system that does fit inside AAV, allowing for correction of the faulty gene that DMD patient’s have. But the research is still in its early stages.

(Credit: Science Translational Medicine)Biophysical Approaches Other gene therapy delivery systems rely as much on physics as they do on chemistry. A device called a gene gun shoots tiny gold or tungsten spheres coated with the needed DNA into cells. Once inside, the genetic material detaches from the spheres. Electroporation, using electricity to punch temporary holes in cell membranes to help naked DNA make its way into the cell, is another physical gene therapy tactic. Researchers are also studying ultrasound, hydrodynamic and magnetic methods of delivery. DNA carries an electromagnetic charge — a negative charge, due to chemical entities called phosphate groups. This enables the molecule to be directed in an electromagnetic field, which in turn opens the possibility of merging genetic and electronic components. That’s a biophysical reality that underlies the maggot-like implants of Orphan Black, but it’s also a gene therapy implant that is emerging in the real world. You may know someone with a cochlear implant, or you may have one yourself, and so you know that they facilitate the transference of sound waves in the air into nerve signals. But researchers have demonstrated in guinea pigs that a cochlear implant also can be used for electro-injection of DNA molecules into the nerve cells that carry impulses from the cochlea (the hearing component of the inner ear) to the brain. These nerve cells comprise the cochlear branch of the vestibulocochlear nerve, but their degeneration leads to nerve deafness. Treating the cells with genes that make proteins called neurotrophins regenerates the nerve, so the next step is to develop similar implants for humans. Testing of such implants has not yet begun on humans, but it may happen within a few years, certainly before you begin seeing Orphan Black style implants sending genetic payload through the body from the cheek.