Transgender health care is a hot-button topic, but the science on its benefits for trans youth is clear. 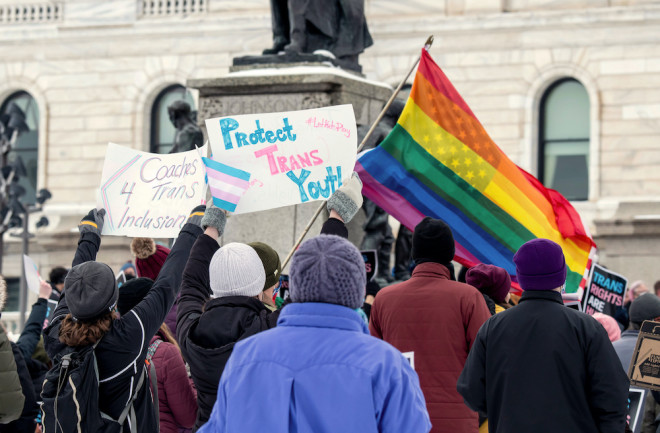 This year, a historic wave of legislation targeting transgender rights has continued. By November, 17 U.S. states had proposed more than 30 bills that aim to restrict access to puberty blockers and hormone injections for minors.

In Alabama, for example, a bill passed this April making it a felony to provide gender-affirming care to transgender minors. If all the other proposed bills are enacted, over 58,000 trans kids and young adults who live in these states would lose access to these medical treatments, according to the Williams Institute at the University of California, Los Angeles. But these measures are facing a growing body of peer-reviewed data on the benefits of gender-affirming care — meaning treatments that help a transgender or nonbinary person match their outward traits with their gender identity.

“It’s very important to point out that this legislation is based on a gross misrepresentation of scientific evidence,” says Diana Tordoff, an epidemiologist at the University of Washington.

In late 2021 and early 2022, several studies dug deep into the mental health benefits of gender-affirming care — and found that these treatments greatly reduce depression and suicidal thoughts in trans teens and young adults. It’s well known that this population is particularly vulnerable to mental health issues. In fact, LGBTQ youth are more than four times as likely as their peers to attempt suicide, and trans and nonbinary youth are the most vulnerable within this community, according to a national survey of nearly 34,000 LGBTQ youth by the nonprofit Trevor Project. That’s why medical professionals and scientists have argued that supporting such care would be lifesaving, benefitting the health and wellbeing of thousands of trans youth.

You’ve likely heard of puberty blockers. This form of gender-affirming care pauses certain physiological changes in a child or teen — administered alongside other measures, like talk therapy — to give a young person time to navigate their gender identity. At 14 years old, that person can start hormone replacement therapy via injections of testosterone or estrogen, according to the World Professional Association for Transgender Health. (This will make their physical attributes look more feminine or masculine.) Later, in their teenage years, they may also consider surgical treatments, like genital or “bottom” surgery, to create a penis or a vagina. A long list of medical organizations supports this care, including the American Academy of Pediatrics, the American Psychological Association and the American Medical Association.

“Every major medical association in the United States recognizes the medical necessity of transition-related care for improving the physical and mental health of transgender people,” the AMA wrote in 2021 in a letter to the National Governors Association.

To date, over a dozen studies have found that access to gender-affirming care is tied to better mental health outcomes in trans youth. For example, a study conducted by the Seattle Children’s Gender Clinic and published in JAMA Network Open in February revealed that access to gender-affirming care led to 60 percent lower odds of depression and 73 percent lower odds of suicidal thoughts and actions over one year of follow-up, compared to trans teens and young adults who didn’t get care.

Another study, by researchers at Stanford University School of Medicine and the Fenway Institute, a Boston-based LGBTQ health care and research organization, analyzed survey data from 27,715 trans adults and published similar findings in PLOS One in January. The scientists also found that individuals who received hormones during adolescence were significantly less likely to have considered suicide over the past year than those who didn’t get care until adulthood.

Likewise, researchers from the Trevor Project discovered that access to hormone treatment was associated with lower odds of recent depression and suicide risk in trans youth, compared to those who wanted hormones but did not receive them. In their data analysis, published in 2021 in the Journal of Adolescent Health, the scientists also controlled for factors that may contribute to improved mental health, like a parent’s acceptance of their child’s gender identity.

For trans youth — and their parents, who are often trying to support their kids and navigate the health care system — access to care is essential, says researcher J. Nyla McNeil. “Trans people, and trans youth especially, are the only people who should be making decisions about their own body,” adds McNeil, who works with the Trans CARE Collaborative at the University of Wisconsin, Madison. “[We must] listen to the people who need the care.”

Despite these findings, policymakers across the country are trying to pass bills that misrepresent scientific evidence to restrict access to gender-affirming care.

Take puberty blockers, which have been used for decades; it’s well known that they are medically safe, and their effects reversible. Yet anti-trans legislation commonly claims this medication will cause permanent alterations to kids’ bodies. Additionally, many bills paint the picture that hormones are provided to any trans youth who asks for them. In fact, current guidelines state hormones cannot be provided before the onset of puberty, and they are typically given to teens who have shown persistent, well-documented distress about the mismatch between their biological sex and their gender identity.

This rhetoric has allowed the Texas child welfare agency, for example, to investigate whether parents providing gender-affirming care to trans youth are committing child abuse. This July, a Travis County judge in Texas temporarily halted two investigations, but at least seven cases against parents of trans kids remain open.

Although many anti-trans bills are being introduced, Tordoff notes that many of them have been shot down and not signed into law — thanks, in part, to quality research and consistent data being published on gender-affirming care.

Beyond datapoints and graphs, Green says the presence of allies who are advocating for trans support and healthcare can notably improve the wellbeing of trans youth. “I am concerned about the messages that young queer and trans folks are receiving in the media about their rights,” Green says. “Trans and nonbinary young people are not in this alone.”