Gay Men May Soon Gain the Right to Give Blood 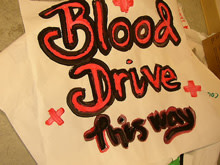 is fraught with arcane restrictions and a mess of complex requirements meant to keep the blood supply as safe as possible (I can't give, for instance, because I lived in England in the early 1990s. Thanks a lot, mad cow scare.) But one of its most controversial—a lifetime ban on donation by men who've had sex with other men—may finally be coming to an end. Massachusetts lawmakers like Senator John Kerry are pushing an overturn of the ban. The Red Cross, American Medical Association, and American Association of Blood Banks all want the lifetime ban to go away, though the Red Cross supports in its stead a single-year donation ban dating back to the last sexual encounter.

The lifetime ban was enacted in 1983 before AIDS was widely understood and has long infuriated gay rights groups since it applies to all gay men regardless of their HIV status. Heterosexuals who engage in risky behavior, like having sex with prostitutes or HIV-positive partners, are only banned from giving blood for a year [Boston Globe].

Besides the ugly unfairness of that arrangement, there's the fact that HIV testing now allows for the detection of infection just weeks after it happens, and everybody who donates blood is screened. Dr. Norbert Gilmore, an AIDS clinician, says the first priority for medical officials has to be keeping the trust of Americans in the blood donation system. But we can do that and still get rid of rules that reflect the AIDS panic of the 1980s and not modern scientific advances.

"With the technology we have, the risks are so small that keeping this ban in place is like permanently grounding the entire aviation system because we're afraid that eventually we might have a single crash," he said [BusinessWeek].

The Department of Health and Human Services is considering the change. If the agency decides to ax the lifetime ban, the change would have to be approved by the Food and Drug Administration. UCLA research

(pdf) found that going to a one-year ban instead of a lifetime one would bring in 90,000 more pints of blood every year; demolishing any ban based on sexual orientation, meanwhile, could bring in 210,000. Related Content: 80beats: Lesbian Parents & Their Well-Adjusted Kids: What the Study Really Means