From the Burns Archive: The Deadly Rays That Cured Cancer 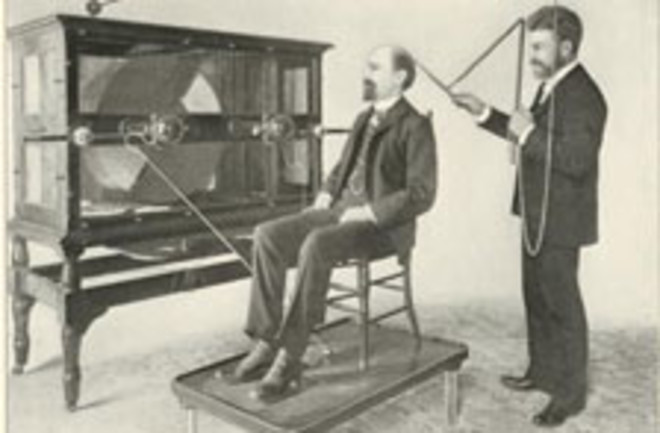 A century ago, an "electrical bath" was sometimes used to kill tumors. The patient's entire body was charged with positive electricity, while the surrounding air was made negative. The air carried off the electrical charge from all parts of the body gradually over several minutes, and was often repeated over one half hour.

The yellowing photographs on the walls of the Burns Archive depict the horrors and marvels of medicine at the turn of the 20th century: early demonstrations of breast surgery, one of the first dental drillings, a pile of feet amputated from Civil War soldiers, and the ballooning legs of a teenager with elephantiasis. The curator of this disquieting assemblage is Stanley Burns, a part-time ophthalmologist with oddball antique glasses who tends to his collection in the same midtown Manhattan brownstone in which he lives and sees patients.

Burns loves digging through his musty trove of thousands of images, which span a period of almost 100 years from the dawn of daguerreotypes through the 1940s. By genre request—Dermatology! Cardiology! Psychiatry!—the doctor will retrieve gems of early photography that make a visitor gasp. Suggest that his collection is macabre and Burns will explain that these pictures allowed the medical community to share knowledge and define pathology. Ask about a particular photo and he will tell you all he knows. Then he will whip out a few more.

From overstuffed cupboards he picks out photographs from one particularly fascinating but forgotten chapter in the history of oncology. They show contraptions that look to be straight out of a science fiction movie. But in their day, these devices were used to treat cancer with a newfound tool: radiation. This medical breakthrough came with a tragic twist, however. While radiation could save or extend the lives of cancer patients, it often killed their doctors, who were repeatedly exposed to its harmful effects. "Doctors who were involved in this field were so thrilled," Burns says. "It was like being first on the moon. They never gave up until they died."

Until the close of the 19th century, a cancer patient had little choice but to watch in terror as a tumor hijacked his body. Cancers could be surgically reduced, but deadly infections often followed the operation. Prior to the passage of the 1906 Pure Food and Drug Act, which banned the sale of poisonous or harmful medicines and food, patients flocked to quack doctors, who provided some relief with placebos and addictive sedatives. Other treatments of the time included bleeding, blistering, vomiting, and electric shock. Yet this turbulent era, Burns says, would usher in "the greatest time of discovery in the history of the world." Just as artificial light, radio, photography, movies, and telephones were transforming the world, so innovations in medicine would stave off the suffering and early death that had once been the norm.

In 1895, Wilhelm Conrad Röntgen of Würzburg, Germany, while experimenting with high voltage currents passed through vacuum tubes, discovered a new form of radiation that caused materials to fluoresce. He had identified the X-ray, a high-frequency form of electromagnetic radiation. The discovery earned him the first Nobel Prize in Physics in 1901.

Doctors were quick to use this odd "light" to view bones and to treat illness. Within the first months of 1896, physicians were blasting cancer with X-rays, and before the year was out more than 1,000 papers and scores of books had been published on the many uses of "roentgen rays." By 1902 editors of The American X-Ray Journal overenthusiastically estimated that 100 diseases could be treated with this invisible beam, including lupus, syphilis, and ringworm. "It was totally magic," Burns says. "This was a phenomenon that was unexpected, unexplained, and really beyond most people's imaginations."

That same year doctors gained another weapon against cancer: radium. Marie Curie, who had spent months extracting the substance from several tons of pitchblende, discovered that even a speck had immense radioactive power. Soon doctors were touting radium, like X-rays, as a cure for every affliction from warts to nosebleeds to infertility. While most of these claims were unfounded, radium treatment could often shrink tumors, extending the lives of cancer patients.

Doctors caught up in the fervor were heedless of the evidence that these rays could be dangerous. "You could hold radium in your hand like it was a grain of salt," Burns says. "It was at the time unimaginable that that could kill you and everyone else in the room." To allay patients' fears about X-rays, doctors would demonstrate the treatment on themselves. Even when the remedy caused the doctors' skin to redden and peel, some tried treating the injury with additional X-rays. Scores of pioneering doctors died after months or years of treating patients. "The result was seen in the empty chairs at our councils and in the vanishing of familiar figures at our meetings," the president of a professional X-ray organization said in 1916. "The most active and earnest of our workers were the worst victims."

In 1925, three decades after Röntgen's discovery and after the loss of possibly hundreds of lives to radiation sickness, the National Council on Radiation Protection and Measurements was formed to establish a maximum exposure for X-rays. Nevertheless, in the following decades patients and doctors were routinely overexposed due to simple negligence. When the public began to question the safety of nuclear testing and of radiation emitted from televisions, the government took notice. In 1968 Congress passed the Radiation Control for Health and Safety Act, which required that lead aprons and other protective gear be worn during treatments.

Today scientists have harnessed the power of radiation, improved upon cancer surgery, and have developed powerful chemotherapies. Radiation treatment is administered with precisely measured, targeted doses, and researchers minimize risk through clinical trials that test for dangerous effects. Today's patients may find it difficult to imagine that doctors once exposed themselves and their patients to experimental therapies with such frightening side effects. But a century ago medical practice was pioneering; death after treatment was all too common. As medical technology advances and we live longer lives, we have come to expect treatment that is safe. Doctors, too, are unwilling to hazard life and limb. "Once we removed death from everyday life," Burns says, "we were no longer willing to take so many risks."