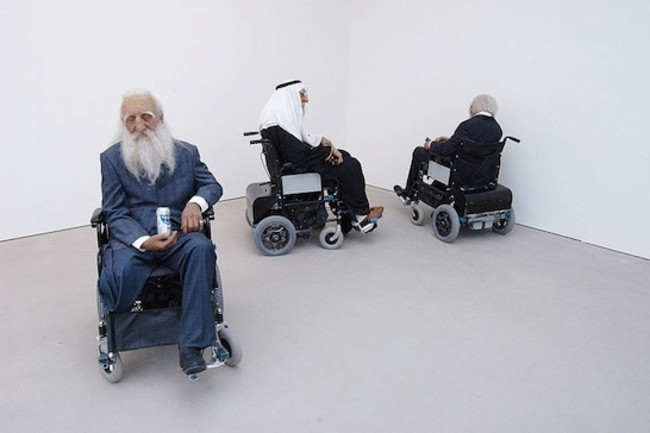 "Who wants to live forever?" Freddie Mercury asks on behalf of the Highlander. Michio Kaku (whom you should be reading because he's wonderful) has started a two-part investigation over at Big Think on just that query. The cliché question comes from the basic problem of living a long time: no one wants to die, but no one wants to get old either. Pulitzer Prize-winner Jonathan Weiner's new book Long For This World examines the science and scientists of gerontologology (aging). Stanford University professor of internal medicine Abraham Verghese reviewedLong For This World in The New York Times and was inspired by Weiner's discussion of longevity. Verghese reflects on his own experience with terminally ill patients:

As a young physician caught up in the early years of the H.I.V. epidemic, I was struck by my patients’ will to live, even as their quality of life became miserable and when loved ones and caregivers would urge the patient to let go. I thought it remarkable that patients never asked me to help end their lives (and found it strange that Dr. Kevorkian managed to encounter so many who did). My patients were dying young and felt cheated out of their best years. They did not want immortality, just the chance to live the life span that their peers could expect. What de Grey and other immortalists seem to have lost sight of is that simply living a full life span is a laudable goal. Partial success in extending life might simply extend the years of infirmity and suffering — something that to some degree is already happening in the West.

I cannot get over the logic Verghese displays here. He notes the will of people to live in spite of suffering and lowered quality of life. The patients merely wanted "the chance to live the life span that their peers could expect." Does he mean the life span science and civilization has already artificially extended fifty years beyond biological design? How does one differentiate between a 30-year-old who wants to be healthy enough to live to fifty and a 90-year-old who wants to be healthy enough to live to be over 100? Verghese is unable to reconcile the desire to live with a terminally low quality of life. The goal of anti-aging is not to simply increase the number of years a person spends alive; instead, the goal is to make every year, even into mid and late life, as healthy and youthful as possible. In his post "Bullish on Longevity" Discover blogger Chris Mooney discusses a pill that would extend healthy life by about seven years. The trick is not to merely extend life, but to instead create a "compression of morbidity: The period of life beset by disease-related suffering and impairment would be compressed, and essentially come right at the end. You live long, you prosper--and then you die fairly quickly." Think of it this way: After taking a special test, you know you will die at the age of 77, but I offer you two options. Option one is that you live a normal life, aging naturally as your genes and lifestyle choices allow. Option two is that you take a pill that keeps you as healthy as you would be at age 30 until you were 74. You'd still mature mentally, build life experience, raise a family and expand your career. But at 70 you could be rock-climbing and getting your third PhD or running marathons and keeping pace with your grandchildren. Which option do you pick? Aubrey de Grey, the prime subject of Weiner's new book, focuses on making option two a reality. Contra Verghese, immortalists have their sights focused directly on allowing a full life span, instead of having the second-half hindered and hobbled by weakness, mental degeneration, and frailty. Alex Horne has a lovely article at the Guardian in which he interviews a bunch of old people who don't seem to enjoy being old. Horne comes to the general conclusion that the death of friends, the Shakespearian loss of senses and abilities, and lack of purpose make being ancient less-than-spectacular. So the trick, as de Grey and other longevity supporters see it, is to stymie aging's worse traits until the very last minute. What Weiner and Verghese seem to miss is that longevity research isn't necessarily about living forever, or even a spectacularly long time, but instead making the years one is alive less hindered by the very process of having lived so long. Make youthful health the bulk of life, not just the early peak.