For Treating Parkinson's, A "Brain Pacemaker" Beats Out Medication 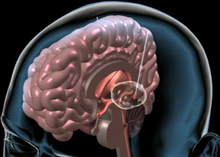 Implanting a pacemaker-like device in the brains of Parkinson's patients improves their condition significantly more than medication and physical therapy, a new study has found. The implantation of a deep brain stimulation device gave patients almost five additional hours each day when they were untroubled by the tremors, jerking limbs, and rigidity that characterize Parkinson's, a movement disorder. But the surgery carries risks: The

deep brain stimulation patients also had almost four times the risk of suffering a serious adverse event like depression, infections, falls or heart problems. Although most side effects could be treated, one patient suffered a brain hemorrhage and died [Chicago Tribune].

The electrodes that doctors install — one on each side of the brain — are actually small, insulated wires that are connected to another wire that runs under the skin to a small battery beneath the skin of the torso. The electrodes are implanted into a part of the brain that normally acts as a relay station for messages. In Parkinson’s patients, a flurry of signals jam this message center, sending aberrant signals to muscles and causing tremors, muscle rigidity, paralysis and other problems. The electrodes send out a mild current that inhibits the stream of messages, relieving the clutter and calming muscle problems [Science News].

The procedure has been an accepted treatment for Parkinson's since regulators first approved it in 1997, but this study is one of the first to systematically compare the surgery's results to outcomes from other treatments. The study, published in the Journal of the American Medical Association [subscription required], noted that many of the side effects experienced by the patients who received the deep brain stimulation device were infections related to the surgery, which is extremely complex. Surgical patients were also more likely to later injure themselves by falling, but the researchers say that statistic could be misleading.

"We had one patient who felt so good he went up to repair his roof, fell down and broke both his legs," said lead author Fran Weaver.... "Patients are feeling so much better, they forget they still have Parkinson's" [AP].

It's also possible that surgery patients experienced more adverse reactions because the study included older patients; one-fourth of the test subjects were age 70 or older. Researches say further studies should be done to investigate whether the surgery can trigger major depression and suicidal thoughts, as a previous study had suggested. But some patients said that the improvement they experienced was worth the surgery's risks. There is no cure for Parkinson's,

and drugs used to control symptoms can lose their effectiveness over time or cause bad side effects, often leaving patients desperate to find a new approach. Sharon Pederson, 51, a Northern California woman who got [deep brain stimulation] in the study, said it restored her quality of life. "The bottom line for me is that without hope, you have nothing to go for with Parkinson's," Pederson said in a telephone interview arranged by Medtronic [Reuters]