For Some Breast Cancer Patients, Node Surgery May Not Be Necessary 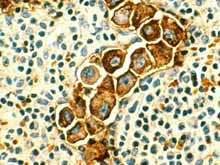 For a century, one of the standard procedures for treating women with breast cancer has been the painful removal of the lymph nodes from under the arm, with the belief that this would hamper the cancer's ability to spread, and extend patients' lives. A study out in the Journal of the American Medical Association, however, is turning heads by suggesting that—in some cases—this common wisdom be overturned.

For women who meet certain criteria — about 20 percent of patients, or 40,000 women a year in the United States — taking out cancerous nodes has no advantage. It does not change the treatment plan, improve survival or make the cancer less likely to recur. And it can cause complications like infection and lymphedema, a chronic swelling in the arm that ranges from mild to disabling. [The New York Times]

patients in this study: women with early-stage tumors and no noticeable swelling of the lymph nodes, and whose cancer hadn't spread. All 891 women in the study had a lumpectomy, meaning not all but part of the breast was removed to get the tumor. Of the 891 women, 445 had their lymph nodes removed while 446 didn't.

[The researchers] found no significant difference in the patients' chances of surviving five years after their diagnosis. The five-year "disease-free" survival rate was 83.9 percent in those who did not have the more aggressive surgery compared with 82.2 in those who did, the researchers reported. [Washington Post]

The overall survival rate was 91.8% for women who had nodes removed and 92.5% for those who didn't—again, not a statistically significant difference. Armando Giuliano, the study's lead author, says he was surprised at his findings. It makes logical sense to remove the nodes; cancer often spreads to them first. But the data just didn't show the benefit connected to taking them out. Why not?

Some think the study results reflect the impact of earlier diagnosis of breast cancer combined with widespread use of chemotherapy and radiation following removal of the primary tumor. Those treatments may make it less important to remove lymph nodes containing metastatic cells. But study authors caution that there are a lot of unknowns about breast cancer cells found in lymph nodes — they may be biologically different from those that cause real trouble when they migrate to bones, liver and other organs. [NPR]

Whatever the reason, the results by Giuliano's team–if they hold up—could mean less surgery (and risk of complications) for breast cancer patients.

Moreover, they said, because survival rates were so high at the five-year mark, it is unlikely that differences in the two groups' survival rates will arise at the 10-year mark or later. [Los Angeles Times]