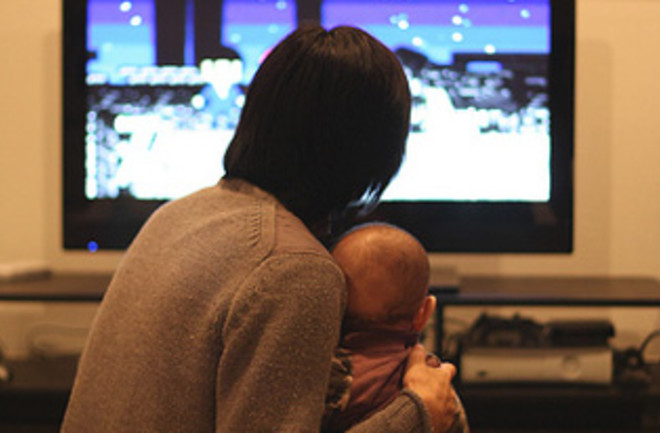 Parents should strictly limit how much children under two years old watch television or videos, says the American Academy of Pediatrics in a new policy statement, since TV time not only doesn't seem to benefit babies, it may come with developmental drawbacks. (Activities like computer and touchscreen games, where the babies interact with what's happening on the screen rather than passively watch it, aren't included in the statement.) The academy issued a similar statement in 1999, discouraging screen time for kids less than 24 months old---and in the intervening decade, there's been more research to back up that recommendation. Time spent watching TV is, scientists point out, time away from the independent play known to be important for healthy cognitive development, and increased screen time is linked to developmental delays. But even if babies aren't simply sitting and watching a video, a TV or movie playing in the background---as one researcher calls it, "secondhand TV"---could have downsides. Not only does it distract babies, who look up at a video on average three times a minute even if they're otherwise occupied by play, it distracts parents, as well, leading them to talk to their little ones less---not good news for babies' language development, which, research suggests, gets a big boost from parental talk time. What's more, there's no good evidence that children under two get anything out of videos, even ones billed as educational. Kids younger than 18 months, one study found, don't even seem to care whether a video is played backward or forward---a sign they're not really following what they're seeing. Read more at