For Impulsive Eaters, Losing Weight Is a Guilt Trip Away 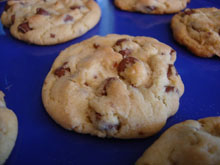 Depending upon your personality, a new study says, the key to laying off the junk food could be matter of letting yourself wallow in guilt. Three scientists tested subjects who were impulsive eaters and those who weren't, asking each group to think about times in the past when they had felt pressure to indulge in some calorie-filled delight. The researchers also secretly watched the subjects when they were given the opportunity to grab some cheese balls or cookies (though given the line of questioning in the test, it seems dubious to suggest that the subjects didn't know their snacking was being observed). For those who identified themselves as impulsive eaters, the key to laying off the offered food was guilt—they remembered times when they had given in to temptation, and used their guilty feelings as motivation to lay off. The test subjects who weren't impulsive personalities were just as consistent, the scientists say, but in the opposite way—they remembered the times they'd resisted temptations, and used those past successes to steel themselves against indulging in the cheese balls. Unfortunately for the impulsive eaters, the scientists found that their "switching" pattern also held in the reverse: If they remembered resisting temptation, they were more likely to pig out. Perhaps this helps to explain how people get sucked into the cycle of gorging and guilt.