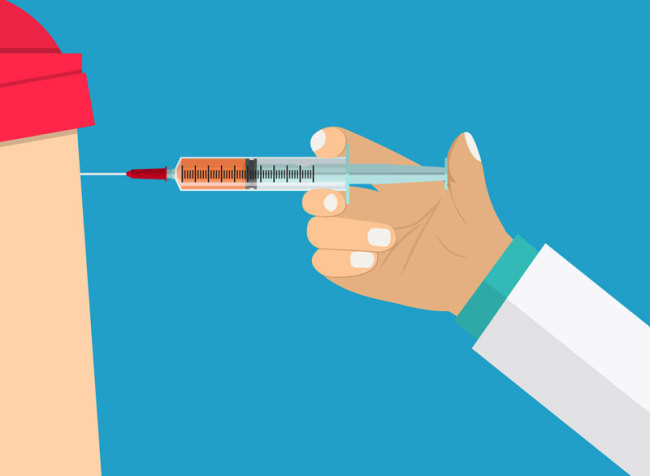 Flu season in the U.S. typically peaks in February, but this year’s outbreak is already one of the worst on record. As of Jan. 6, 20 children have died from the flu, and overall mortality caused by the flu is already double that of last year’s. One reason the flu is so severe this season is that the dominant strain is H3N2, which has an impressive ability to mutate and is particularly aggressive against Americans over 50. Making the threat worse is the fact that most of the IV saline bags used in common medical treatments and procedures – including severe cases of the flu – are made in Puerto Rico, which is still reeling from Hurricane Maria. Hospitals in some areas around the country that are operating at or above capacity because of the flu are quickly running low on saline, resorting to time-consuming and potentially dangerous treatments of patients. The IV saline shortage is unlikely to cause a life-threatening breakdown of medical treatments. But the shortage does expose a dangerous flaw in the medical supply chains that everyone relies on to counter disease outbreaks or bioterrorism. Many different types of important medical equipment and medicines either come from abroad or rely on a single producer.

Globalization has changed the way we produce, transport and store almost anything, including medicines and medical supplies. Now that it’s inexpensive to transport goods, many can be easily produced abroad at substantially lower costs. In nearly all cases, that benefits producers and consumers alike. For the medical industry, approximately 80 percent of all pharmaceuticals used by Americans are produced overseas. The majority of this production takes place in China and India. Forty-three percent of saline in the U.S. comes from Puerto Rico. The U.S. was already running below optimal levels of saline when Hurricane Maria hit. Rapid transportation of goods also allows most industries to rely on “just in time” deliveries. That means goods arrive only shortly before they are needed, rather than arriving in large shipments. In most situations, and for most goods, that causes few issues. However, when there’s an insufficient stockpile, delivery delays can be life-threatening. Many of our hospitals receive shipments of critical pharmaceuticals three times a day.

As researchers studying how countries can prepare for disease and disasters, it’s clear to us that the IV saline shortage is just the tip of a gigantic iceberg. There are two ways the “just in time” system can be disrupted: an unexpected surge in demand or a delay in delivery. In this case, both occurred simultaneously. The U.S. is dealing with an unusually potent strain of the flu, while Hurricane Maria brought production in Puerto Rico to a grinding halt. If only one of the two had occurred, it’s unlikely the U.S. would have experienced a shortage. Now, hospitals overrun with flu patients have to turn to alternatives to IV saline. One is an IV push procedure, in which medications are manually “pushed” into the IV line. This can be deadly if not done correctly. In the case of IV saline, the simultaneous occurrence of both demand and delay was accidental. Unfortunately, it’s not only possible that such confluence will occur in the future – it’s likely. In the case of pandemics or biological warfare, there will likely be both a surge in demand for important goods and a simultaneous disruption of production and delivery. If a pandemic disease severely affected China or India, where large shares of medicines come from, production could be knocked out or slowed. That would leave the rest of the world vulnerable to the disease’s spread, because there would be no supply of crucial medicines to combat it. The 1918 influenza pandemic caused disruptions that prevented coal from being delivered to the northeastern U.S. That left some without heat in the height of winter, causing people to freeze to death and compounding the deadly pandemic. Today, such a breakdown could leave hospitals and other crucial infrastructure without electricity. If the spread of the disease is intentional, as in cases of bioterrorism or bio-warfare, adversaries could target global supplies of crucial treatments.

The destruction in Puerto Rico and the impact it has had on the supply of small IV saline bags in American hospitals is a warning. This time, it’s IV saline. Next time, it might be electricity to run intensive care units or critical antibiotics to treat infections. Global supply chains are a massive puzzle, but public health and emergency preparedness officials need to, at a minimum, understand every link in the chain of critical goods. Without a thorough understanding of the supply chain, it’s difficult to preempt problems that could arise in times of emergency. Hospitals and other crucial infrastructure, such as power plants and the transportation industry, may want to diversify their suppliers of critical goods and encourage those suppliers to not focus production in a single area, especially not to an area prone to natural disaster. A final, but far more costly, option is to ensure we can produce most of these goods domestically in times of emergency. In our view, the solution depends on a partnership between government and industry. Federal, state and local governments have to alter procedures, but private companies involved in the production and delivery of critical goods have to plan ahead for emergencies.

If these weaknesses in our global supply chains are not addressed, especially as they relates to medical supplies, pharmaceuticals and other critical goods, we are headed for disaster.