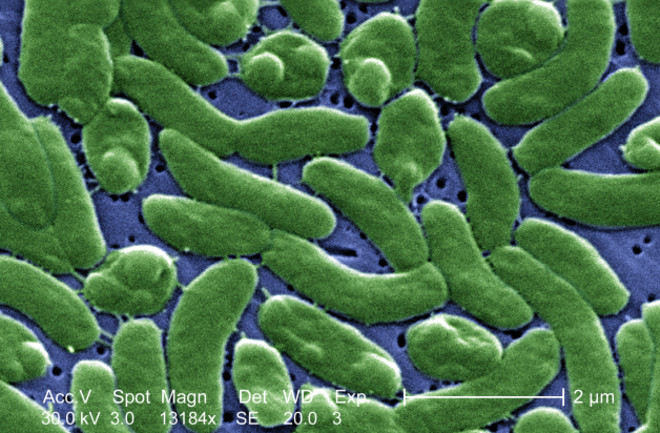 Vibrio vulnificus bacteria. (Credit: Wikimedia Commons) It’s spring, and I’m attending a luxurious seafood banquet. Platters of shellfish fill the tables: crab with limbs akimbo; shrimp ready to be peeled; miniature lobster-like langostino peering at my dinner plate as if knowing their fate. Raw oysters sit in the center of the platter, piled absurdly high and shimmering luminescent on the half shell. Until now, I’ve never eaten a raw oyster. I apply a generous squirt of lemon juice and watch the white-grey flesh ripple ominously in reply. Tilting my head back, I down the shell’s contents in one shot of citrusy ocean. The gelatinous solid slides down my throat largely unchewed as I submit a silent prayer to the gods of food safety, asking not to become the subject of an ironic headline: “Research scientist studying bacterium found in raw oysters falls ill after eating…a raw oyster.” Thankfully, I walked away from the banquet without encountering Vibrio vulnificus, the bacterial subject of my Ph.D. Much as I want to be an academic expert on V. vulnificus, there are aspects of the microbe I hope never to attest to first-hand. But as the planet’s oceans heat up, the odds of a potentially fatal rendezvous will continue rise along with the temperature. Just as Zika caught researchers off guard, V. vulnificus could be the next public health threat that rapidly grows from a whisper to a shout. That’s why scientists, like me, are racing to understand this menacing microbe. High Stakes, High Costs V. vulnificus is a normal part of marine and estuarine environments, but it can travel from seawater into open wounds of swimmers, waders, or fishermen/women to instigate the flesh-eating skin disease necrotizing fasciitis. The bacteria also cause gastrointestinal (GI) infections when consumed in contaminated seafood – usually oysters. The microbes then have a propensity to escape the initial infection site and enter the bloodstream. That’s when trouble really starts, as dermatological or gastrointestinal symptoms give way to sepsis and multi-organ failure. Wound infections are lethal in more than 20 percent of cases, and foodborne infections, more than 50% of cases. Right now, the bacterium only causes about 100 foodborne infections in the United States each year, a number that pales in comparison to the roughly 1 million cases of foodborne Salmonella each year. Plus, most V. vulnificus cases occur in individuals with pre-existing medical conditions, like liver disease, which make them more susceptible to infection. Yet with its striking mortality rate, V. vulnificus is a grave health concern for those infected. And economically, the U.S. Department of Agriculture reports that, at $3.3 million per case, the 100 annual cases are responsible for more than $300 million in economic burden due to medical costs, productivity loss, and death. What’s more? These numbers are rising, and climate change may be to blame. Thermal Expansion V. vulnificus is bacterial cousin to the microbe that causes cholera and, similarly, thrives in temperate aquatic environments with moderate salinity. Bays and estuaries in the southeastern United States are perfect breeding grounds, particularly in the heat of summer. As climate change increases global ocean temperatures, the bacterium’s range is expanding to regions, such as Sweden and Finland, that were historically considered too cold to support the bacteria.

V. vulnificus can instigate the flesh-eating skin disease necrotizing fasciitis and can also cause gastrointestinal (GI) infections when consumed in contaminated seafood – usually oysters. (Shutterstock) Many laboratory and ecological experiments have now shown that warmer waters can support larger numbers of Vibrios. By analyzing a large collection of environmental samples from the past half-century, scientists recently concluded that increasing water temperatures are closely linked to increases in Vibrio populations and, moreover, to human infection incidence over those same 50 years. Relatedly, over a 15-year span (1996-2010), the annual incidence rate of V. vulnificus infections, as reported by the foodborne disease platform FoodNet, increased nearly fivefold. In addition to overall increases in ocean temperature, climate change is also implicated in sporadic temperature variations, or “climactic anomalies.” As the name implies, these anomaly events don’t have to obey the general trends. On the whole, global oceans are warming at an average rate of 0.063-0.078 ^oC/year, but in a given summer a heat wave can warm a water body by more than a degree. For example, American and European researchers studied the Baltic Sea, and found that when the maximum annual temperature of the water increases by 1^ oC , the number of Vibrio cases increases 1.9 times. In other words, just a few weeks of warmer water spells double V. vulnificus trouble for the whole year. Meddling Middlemen While V. vulnificus might be coming toward you, it isn’t coming for you, per se. Humans are not a necessary part of the bacterial life cycle, nor do our bodies provide a welcoming environment for the microbe. The problem, for us, is the oyster middleman. Oysters are the Brita™ filters of the ocean. According to the Chesapeake Bay Foundation, a single adult oyster filters upwards of 50 gallons of water per day. Water emerges from the oyster newly purified, while marine algae, plankton, and – yes – bacteria, including V. vulnificus, often remain inside. When humans eat oysters, we consume the “dirty” filter, microbes and all. Oyster post-harvest processing (PHP) uses various methods of sterilization to kill bacteria, eliminating the risk of oyster-borne infection. In 2009, the Food and Drug Administration (FDA) moved to require that all oysters harvested during warm months undergo PHP as a method of front-end V. vulnificus infection prevention.

Between May and August 2013, 104 Vibrio parahaemolyticus-relatedillnesses linked to shellfish consumption were reported to the Centers for Disease Control. V. parahaemolyticus is closely related to V. vulnificus, and also causes gastrointestinal illness. (Credit: CDC)  In a press release responding to the putative PHP mandate, representatives of four different shellfish grower and harvester organizations cited concerns that PHP oysters are less appealing to customers and that the putative lost revenue would have severe economic impacts in coastal regions. The oyster harvesting industry and Gulf Coast regional elected officials were so resistant to the proposed policy that the FDA rescinded it just a few weeks later. In May 2016 – seven years following withdrawal of PHP mandate proposals – the Center for Science in the Public Interest filed a lawsuit against the FDA over a lack of action regarding oysters and V. vulnificus. This controversy leaves us with two choices: implement blanket regulations that burden the oyster industry and deny oyster lovers the option of unprocessed shellfish; or, leave at-risk consumers to fend for themselves against the shattering health and economic ramifications of V. vulnificus. However, there’s a third option. It’s science.

Scientific research has the potential to generate specific, targeted methods for preventing and treating V. vulnificus infection in humans. In order to do that, of course, scientists need to understand the infection. We collect samples to study the dynamics of V. vulnificus in the environment. We model infections using mice, to better understand disease progression. We identify and study bacterial ‘virulence factors’, particularly secreted toxins, which contribute to poor disease outcomes. We study interactions between virulence factors and human cells to reveal mechanisms of toxicity. Yet V. vulnificus research is still in its infancy, and struggles to compete with other high-profile diseases for funding. Even in the realm of foodborne pathogens, V. vulnificus doesn’t garner the same attention and money of more prevalent but less lethal microbes, like Salmonella. Scientists who know the current impacts of V. vulnificus and foresee its devastating future are racing to figure out cures and preventative measures. But that is the end destination on a long road, and the research caravan needs gasoline for the whole trip. The Zika research caravan had to advance from zero to 60 extremely quickly when the tropical virus emerged from obscurity into World Health Organization limelight. Ideally, the V. vulnificus caravan would pick up pace before the bacterium’s infection incidence skyrockets. This hasn’t happened yet. So for now, V. vulnificus just whispers quietly, from a shimmering oyster on someone’s seafood platter. Beware. Hannah Gavin is a PhD candidate at Northwestern University studying Vibrio vulnificus. The viewpoints of the author are her own and are not intended to represent those of her colleagues, laboratory, or university.