Flashback Friday: Would a rose by any other name smell as sweet? 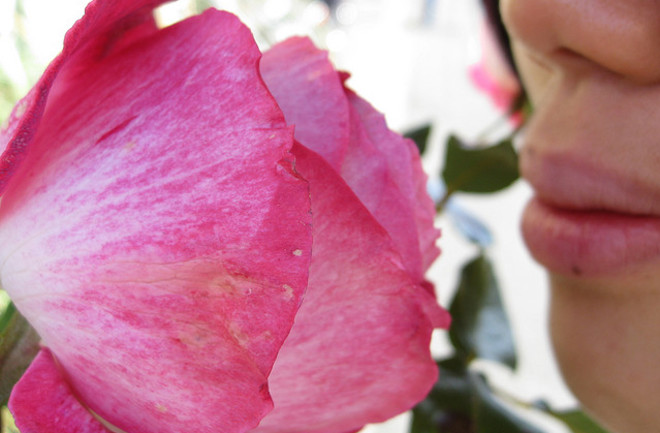 Photo: flickr/hendryWhen it comes to smells, apparently there is quite a lot in a name. In this study, the researchers had subjects smell the same odors with either positive names ("parmesan cheese", "countryside farm", "dried cloves"), negative names ("dry vomit", "human feces", "dentist's office"), or neutral names (numbers). As you might have guessed, the smells with negative names were perceived as more intense and sniffed less than those with positive or neutral names. So there you have it; proof that names make things smell different after all. Suck it, Shakespeare!A rose by any other name: would it smell as sweet? "We examined whether presenting an odor with a positive, neutral, or negative name would influence how people perceive it. In experiment 1, 40 participants rated 15 odors for their pleasantness, intensity, and arousal. In experiment 2, 30 participants passively smelled 10 odors while their skin conductance (SC), heart rate (HR), and sniffing were recorded. We found significant overall effects of odor names on perceived pleasantness, intensity, and arousal. Pleasantness showed the most robust effect of odor names: the same odors were perceived as more pleasant when presented with positive than with neutral and negative names and when presented with neutral than with negative names. In addition, odorants were rated as more intense when presented with negative than with neutral and positive names and as more arousing when presented with positive than with neutral names. Furthermore, SC and sniff volumes, but not HR, were modified by odor names, and the SC changes could not be accounted for by sniffing changes. Importantly, odor names presented with odorless water did not produce any effect on skin conductance and sniff volumes, ruling out the possibility that the naming-related findings were triggered by an emotional reaction to odor names. Taken together, these experiments show that there is a lot to a name, at least when it comes to olfactory perception." Bonus table from the full text: