Flashback Friday: What do you get when you combine forensic scientists, chainsaws, and pig carcasses? The goriest research ever! 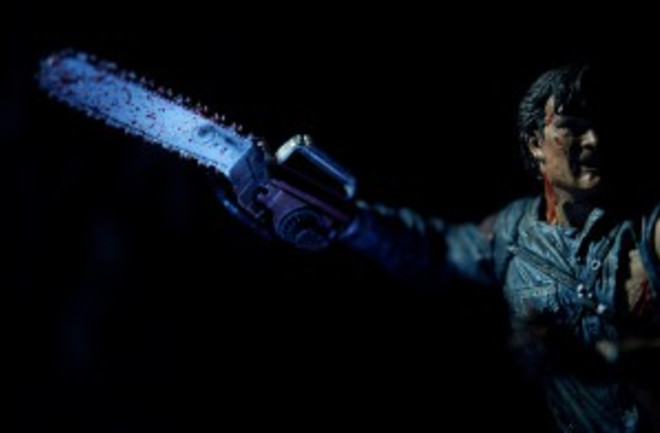 Photo: Flickr/JD HancockIf CSI is anything like real life, forensic scientists experience many disturbing things, so it probably takes something very unusual to pique their curiosity. Say, for example, the location of a human dismemberment by chainsaw that has a curiously small amount of blood and tissue spatter. So what does any forensic scientist worth his (or her!) salt immediately do? Why, procure a couple of pig carcasses and reenact the scene, of course! Eughgh! Blood and tissue spatter associated with chainsaw dismemberment. “In response to the unexpected paucity of blood/tissue spatter at the site where a body of an adult woman was dismembered by an electric chainsaw, we dismembered two large pig carcasses with a small electric chainsaw in a controlled environment. These experiments demonstrated first that a large carcass could be easily dismembered by a small electric chainsaw. When the chainsaw bar is held parallel to the ground the majority of the blood and tissue is deposited directly beneath the saw and bar and very little elsewhere. If the discharge chute of the saw however is not oriented directly at the ground, larger amounts of blood and tissue may be sprayed on lateral surfaces or deposited some distance from the chainsaw. The characteristic striations created on the surface of wood as it is cut by a chainsaw can also be found on bony surfaces cut by a chainsaw.” Related content: NCBI ROFL: First-person shooter games as a way of connecting to people: "brothers in blood". NCBI ROFL: On the explosion of carcasses. NCBI ROFL: National anthems and suicide rates.