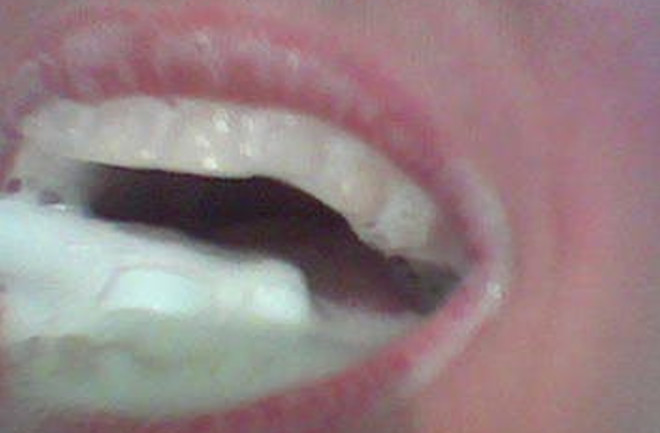 Photo: flickr/Marcela GSometimes the human brain does weird things. Take the woman described in this case study, for example; when she brushed her teeth, it would induce a seizure that resulted in an orgasm before she passed out. It seems that there was reduced blood flow (hypoperfusion) and some damage (atrophy) in part of her brain that likely caused her tooth-brushing-induced orgasms. No other activity seemed to produce this effect, including brushing without toothpaste. Why this particular combination of stimuli worked remains a mystery (to the disappointment of dentists everywhere).Tooth-brushing epilepsy with ictal orgasms. “We report a 41-year-old woman with complex reflex epilepsy in which seizures were induced exclusively by the act of tooth brushing. All the attacks occurred with a specific sensation of sexual arousal and orgasm-like euphoria that were followed by a period of impairment of consciousness. Ictal EEG demonstrated two events of epileptic seizure that were provoked after tooth brushing for 38 and 14 seconds, respectively. The interictal EEG showed epileptiform discharges over the right anterior temporal region and interictal single photon emission computed tomography (SPECT) scan showed relative hypoperfusion in the uncus of right temporal lobe. Brain magnetic resonance imaging (MRI) revealed right hippocampal atrophy. We suggest that tooth-brushing epilepsy, especially with sexual ictal manifestations, may provide insight into the cerebral pathophysiology at the right temporolimbic structure.” Bonus quote from the full text: “A 41-year-old right-handed woman was diagnosed with intractable epilepsy and referred to our epilepsy clinic. At the age of 22, she had received an abdominal total hysterectomy due to uterine leiomyomas with bleeding. She had not had any children. After the surgery, she ceased having orgasms during sexual intercourse or masturbation. Two years after surgery, while brushing her teeth, she suddenly felt sexually aroused and experienced orgasm-like euphoria very similar to orgasms during coitus. The erotic feeling was followed by a period of impairment of consciousness lasting for about 2 minutes. There were no jerky movements or convulsions. For the next 5 years, she experienced recurrent episodes of these ‘unknown’ orgasms approximately twice every week and occurring exclusively during tooth brushing. She believed that she was possessed by a demon and felt shame and fear. Nevertheless, after three injuries due to the episodes of impairment of consciousness she started to seek medical advice at the age of 29. She was diagnosed with complex partial seizures and carbamazepine therapy was started. However, her seizures could not be controlled by carbamazepine (600 mg/day) alone and valproate (1500 mg/day) was added. Tracing back her seizure history, all seizures occurred during the complete act of tooth brushing (using toothbrush and toothpaste together). Apart from the act of tooth brushing, no other trigger factor could be identified. Prolonged stimuli to the teeth and gums by chopsticks or fingers did not provoke the seizures. The seizures could not be induced by either the smell of toothpaste or the shaking movement of right hand. She did not think that brushing a specific side or area of her mouth or a specific brand of toothpaste or toothbrush was particularly associated with the occurrence of the seizures. She has never had spontaneous seizures.” Related content: Discoblog: NCBI ROFL: What your lips reveal about your orgasms. Discoblog: NCBI ROFL: What can 2,914 Australian twins tell us about the evolution of the female orgasm? Discoblog: NCBI ROFL: Sexual intercourse and masturbation: Potential relief factors for restless legs syndrome?