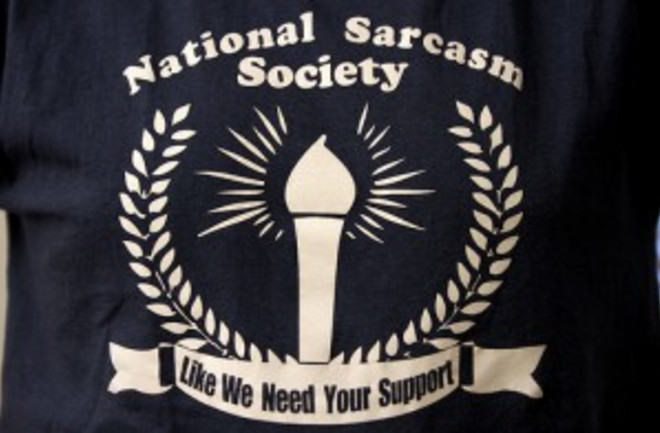 Photo: flickr/acidpixYou've probably received at least one of those emails that leave you wondering: is this for real, or is is supposed to be "funny"? In this study, the authors used a series of experiments with Cornell undergrads to test whether people are able to convey sarcasm over email as well as they think they can. The short answer is no - people are overconfident about their ability to communicate - but you should definitely read the excerpt below to get an idea of the types of phrases they used for the experiment. They're just soooooo clever. Also, a word to the wise; when in doubt about your ability to convey subtle humor like sarcasm, add an emoticon. ;) Egocentrism over e-mail: can we communicate as well as we think? "Without the benefit of paralinguistic cues such as gesture, emphasis, and intonation, it can be difficult to convey emotion and tone over electronic mail (e-mail). Five experiments suggest that this limitation is often underappreciated, such that people tend to believe that they can communicate over e-mail more effectively than they actually can. Studies 4 and 5 further suggest that this overconfidence is born of egocentrism, the inherent difficulty of detaching oneself from one's own perspective when evaluating the perspective of someone else. Because e-mail communicators "hear" a statement differently depending on whether they intend to be, say, sarcastic or funny, it can be difficult to appreciate that their electronic audience may not." Bonus excerpt from the full text: “We attribute these results to egocentrism. Because senders knew, for example, that the statement “Blues Brothers, 2000—now that’s a sequel,” was meant to be sarcastic, they egocentrically assumed that their audience would as well. They presumably did not realize how ambiguous the statement really is without verbal emphasis on the word “that’s,” a facial gesture such as an eye roll, or some background information about the communicator (such as his or her taste in films). Note, however, that despite reliable overconfidence, accuracy rates were quite high (84%). It would therefore be misleading to suggest from these data that people are poor at communicating sarcasm over e-mail. These data do suggest, however, that however able people are, they are not as able as they believe.” Related content: NCBI ROFL: The real reason Nigerian princes use email instead of handwritten spam.NCBI ROFL: Smilies, emoticons scientifically proven not worthless.NCBI ROFL: Writing emails as part of sleepwalking after increase in Zolpidem [Ambien].